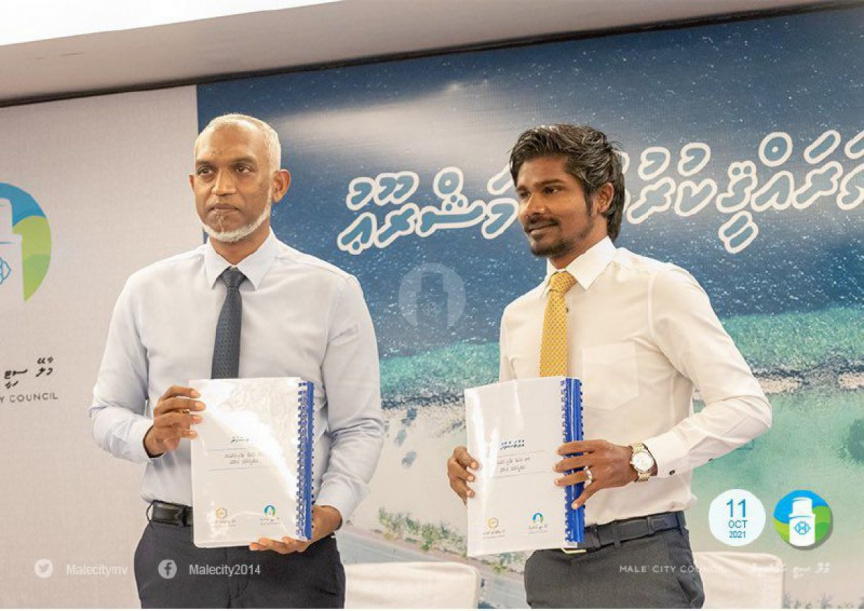 Male’ City Council and Road Development Corporation (RDC) has signed an agreement to lay asphalt and renovate 16 additional roads in Male’ City up to modern standards – including the ring road.

Yesterday’s agreement upgrades the scope of work contracted to RDC under the Male’ City Streetscaping Project – tasking them to renovate a total of 105 roads spanning a total of 51.3 kilometers.

Speaking at the signing ceremony, Mayor Muizzu detailed that the new agreement was made revising the former agreement in order to ensure that the work under project is completed within the shortest timeframe possible.

“What we want is to finish renovating a large number of roads with a short frame of time to ease the difficulties faced by the people. A total of 105 roads will be renovated under this project. This agreement was also signed for the purpose of laying asphalt at 16 roads in Male’ City which diverts high traffic to,” he had said.

Mayor Muizzu also highlighted that the public will face some difficulties within the two years in which the project is progress – however, added that the project will resolve some of the longstanding issues faced regarding the roads.

RDC’s Managing Director Mookey also spoke at the ceremony. He assured RDC’s full cooperation in implementing the project to its best – also adding that the company will also be cooperative in such projects initiated for the benefit of the people.

“I am content with the speed of RDC’s work. Our aim is to carry out the project without compromising the quality – instead of just doing something for namesake – and handing it over to the Council,” Mookey added.

Male’ City Council said that the project will also see the expansion of the road which Male’ North Harbor is situated at – to ease crowding in the area.

In addition to this – they noted that the roads being developed under the project will be greener and easily accessible to persons with disabilities. Moreover, it will also ease difficulties in terms of vehicle parking as well as unloading and loading goods.

RDC also said that the difficulties raised by people when the project is being implemented would also be addressed.

‘PPM & PNC have a hand in RDC headquarters break-ins’

Male’ streetscaping pilot phase to be complete in Dec.