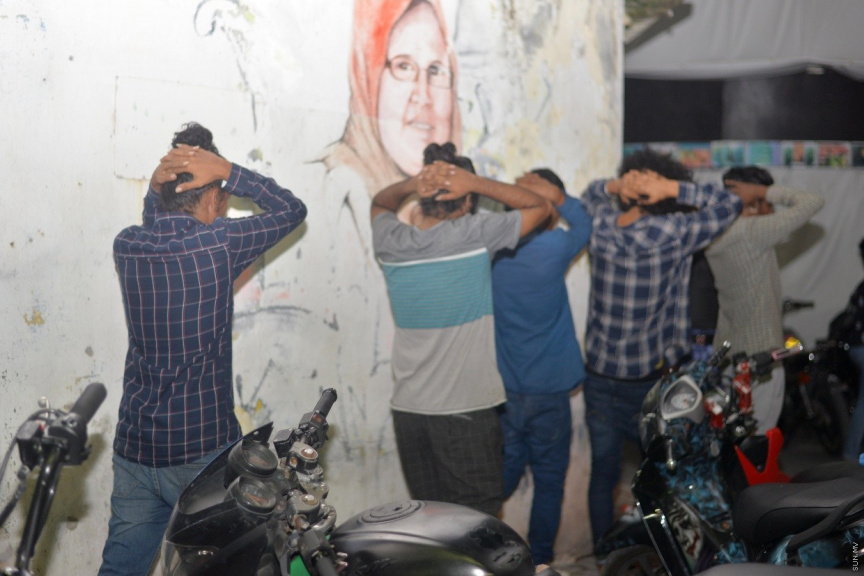 Police arrest suspects in response to a stabbing in Male' City on November 14, 2017. (File Photo/Sun)

Police have arrested four young men with sharp-edged weapons in a crackdown on gang violence sparked by the recent wave of gang fights in the Maldivian capital.

A police spokesperson said the police conducted a search operation under court order on an apartment in Hulhumale’ Phase I on Friday, during which they seized drugs and sharp-edged weapons.

All four suspects were remanded in custody of the police for 15 days when presented before the court for their remand hearing.

Police have initiated a large-scale operation in response to the wave of gang attacks which have been taking place in Male’ City and suburban Hulhumale’ since May 2.

Police have set up check posts in Male’ City and Hulhumale’, and are checking vehicles and searching properties under court order.

Police have arrested a number of suspects in the operation, one of them as young as 15 years.

Meanwhile, seven more suspects wanted by police in connection to the cases remain at large. They are:

The cases of gang violence are under investigation by the Serious and Organized Crime Department.

One involved in violence on Eid remanded for 15 days

Teens arrested in connection to violence on Eid

Suspects arrested after string of attacks in Male'

Police search for groups involved in violence in Male'