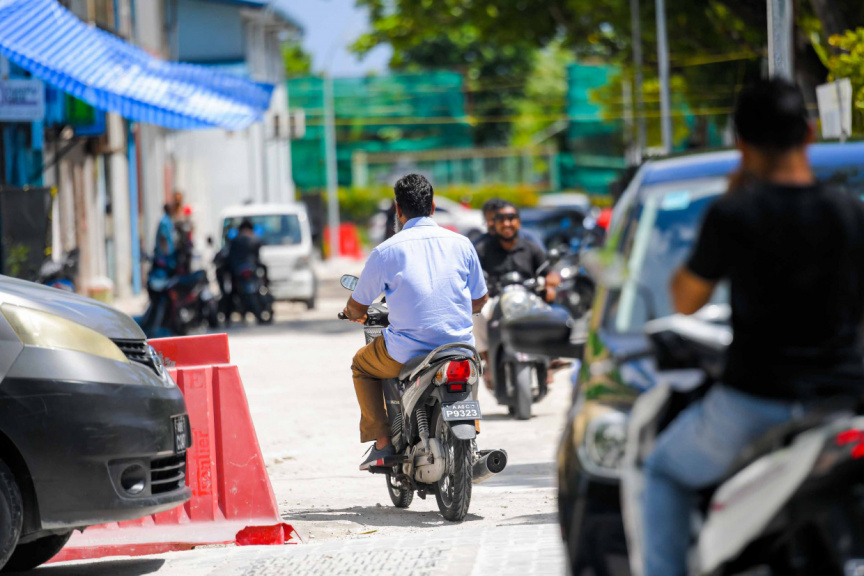 Ameenee Magu is one the biggest roads in Male’ City, therewith, is one which is most frequently used. Nevertheless, the condition of the road posing major difficulties to pedestrians and motorists who use it, is a long-standing concern of Male’ residents.

Years following complaints from the public – redevelopment works of Ameenee Magu recently. The current administration decided to lay asphalt on the road, and develop it up to modern standards.

Nevertheless, this was a pledge made on multiple occasions; similarly, by the previous administration as well.

Redevelopment of Ameenee Magu was first contracted to Male’ City Council for MVR 39 million. The project was later awarded to Road Development Corporation (RDC) – for twice the amount at MVR 84 million on July 3.

Planning Ministry contracted RDC to develop 7.1 kilometers of asphalt road, install a storm drain system, and install street lights within 210 days. Physical works on the redevelopment of Ameenee Magu was officially inaugurated on August 30, during a special ceremony. In order to carry out the work, Ameenee Magu has been closed from where the road intersects with Boduthakurufaanu Magu up until Irudheymaa Hingun.

The awarding of the project to RDC itself raised questions from the public as well. That is as people doubted whether the company possessed the capability to implement a project of this scale.

RDC came under extreme scrutiny when they initially commenced the redevelopment works – due to the cut down of trees in Ameenee Magu for construction. A court case was also filed requesting an interim order to halt the project over the deforestation.

In response, RDC said that redevelopment works cannot be carried out without cutting down the trees. They also pledged to plant a tree on the road, for each one cut down.

The trees in Ameenee Magu which were cut down were transported to Kudagiri – the picnic island being developed especially for the Male’ area.

Three months later, on Tuesday, RDC announced their decision to temporarily halt physical works on the redevelopment of Ameenee Magu over equipment constraints. To date, asphalt has not been laid at any parts of the road.

As a result, many have questioned the delays in laying asphalt over the area of the road which had already been closed. This is as many days have passed since all works in the area, apart from laying asphalt had been completed.

The area of the road is now accessible to vehicles, for both driving and parking. It has previously been leveled out, after the removal of the paving stones.

As a result, a lot of people have emphasized on the possibility of having to undertake work previously completed.

Moreover, the halt of works on the project has further exacerbated criticism from the public – many posing the question as to why such a major scale project had not been awarded to a company more capable of undertaking the work.

Some have also posed the question as to whether a company lacking the proper equipment will be able to see the project to completion within the mandated timeframe.

Similar concerns continue to flood social media. In this regard, many continue to point to increased difficulties over the delay in the redevelopment works as Ameenee Magu is utilized by many pedestrians and motorists.

The area closed off in Ameenee Magu at present is Dharubaaruge area, which many frequent for events. Access to Dharubaaruge remains difficult due to digging in the area. The area which also comprises of many shops, cafés and clinics – similarly faces difficulties in accessibility. Subsequently, many businesses are expected to incur losses.

Many believe this will decrease income for businesses – making them susceptible to bankruptcy.

As so many concerns loom over the matter – the biggest question is whether the project will reach completion; something many has begun to doubt. They believe the government and RDC have failed in developing Ameenee Magu up to modern standards.

"Ameenee magu will have nice, big trees by project end"

Redevelopment of Ameenee Magu to begin on August 30