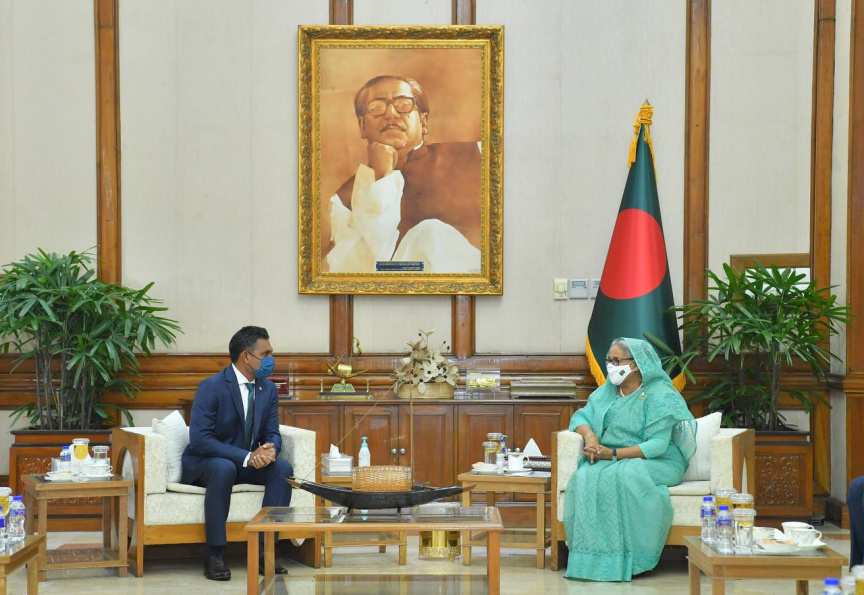 Faisal concluded his visit and returned to Maldives on Wednesday evening.

Faisal travelled to Bangladesh on Monday morning. He was received upon arrival at the Hazrat Shahjalal International Airport in Dhaka by Bangladeshi Foreign Minister Dr. AK Abdul Momen.

On the first day of his visit, Faisal toured several key institutions in Bangladesh, including Bangabandhu Museum, the Bangladesh-Korea Technical Training Centre (BKTTC) and the National Institute of Advanced Nursing Education and Research (NIANER), where he discussed partnerships in developing technical capacity in Maldives, especially in the areas of healthcare and education.

He accepted scholarships offers for Maldivian students from Bangladeshi Institutions.

On the final day of his visit, Faisal paid a courtesy call on Bangladeshi Prime Minister Sheikh Hasina. His meeting with her had followed a meeting with Health and Family Welfare Minister Zahid Maleque.

Faisal was accompanied on the trip by a delegation of cabinet ministers and high-ranking officials from the President’s Office and the government.

'Govt. projects carried out without discrimination'

VP signs book of condolences in memory of Copy Rasheed

'Schools set the best example during the pandemic'

'Strengthening healthcare in the atolls a top priority'