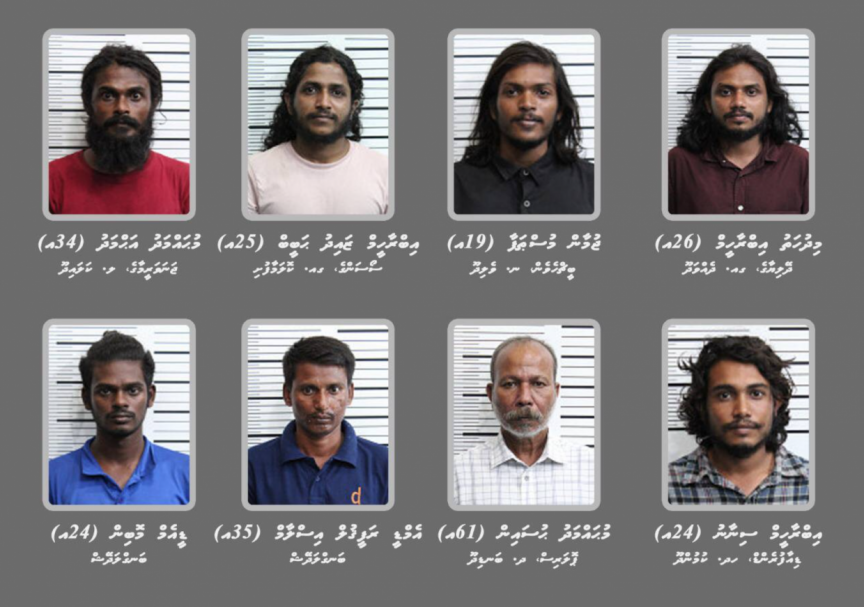 Maldives Police Service has released the identities of eight individuals arrested during a counter-drug trafficking operation carried out last Wednesday. The operation was prompted upon receiving intelligence that a large amount of drug was to be trafficked into the Maldives via sea.

The success of the operation was announced by Commissioner of Police Mohamed Hameed in a tweet on Thursday afternoon. In this regard, he detailed that the well-executed counter-drug trafficking operation was a collaboration of the Drug Enforcement Department (DED), Drug Intelligence, Marine Police, and Forensics Department.

During the operation, police arrested 10 suspects, searched 10 locations and seized approximately 100 kilograms of heroin – within a duration of 24-hours.

Although 10 arrests were made initially – only eight were remanded in police custody by the Court. They are:

Two arrested alongside the aforesaid 8 individuals were released by the Criminal Court. Subsequently, the Police have requested the Prosecutor General’s Office (PGO) to appeal the Court’s decision.

Police further noted that the two released are individuals they suspected to play a lead role in trafficking drugs into the Maldives.

Locations searched by the Police during this operation include some uninhabited islands, Hulhumale’, Male’, some private residences in Male’, a safari and a launch.  The drugs discovered in this bust were found hidden at ADh. Bodukaashihuraa, an uninhabited island.

Following this successful drug bust on Wednesday – the Police had also arrested two individuals with 215 kilos of heroin in a second counter-narcotic operation carried on last Friday.  Both individuals arrested have been remanded in police custody for 15 days.

Two arrested for selling US dollar in black market