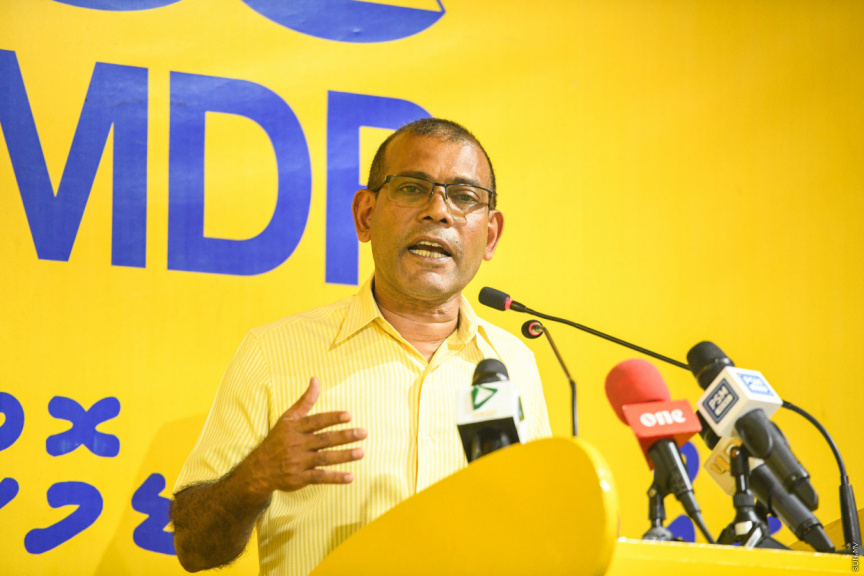 Speaking at a campaign event at Addu City’s Maradhoo on Monday night for the upcoming presidential primary of MDP – Nasheed said that if he succeeds in the primary and then the presidential election he would transfer the government shares in Addu International Airport Private Limited to Addu City Council and the public.

Underscoring Gan International Airport to be the oldest international airport in the Maldives – Nasheed said the airport has not been utilized to its full capacity to date. He added that this could be best achieved by private businesses undertaking the development of the airport in collaboration with foreign experts.

As Nasheed believes, the government holding onto its shares Addu International Airport Private Limited as detrimental to the airport. On this note, he said MDP’s policies revolved around carrying out infrastructural development through public-private partnerships.

“Hopefully, in the next MDP administration – will formulate policies in a manner the shares can be transferred Addu City Council and the public. To turn over the large percentage in Finance Ministry to City Council as I see is the easiest way forward in developing this airport,” he said.

Noting that British always expressed an interest in developing Gan International Airport as a commercial airport – Nasheed said that he believes Addu residents would not find it difficult to let things take this course. He added that such projects can be carried out in collaboration with a private party.

“When coming across a British cabinet minister or a business person who has even little knowledge on the Maldives – they inquire about Gan Airport and Addu,” he also said.

This was a decision heavily criticized by the opposition at the time. The contract with GMR was terminated during Dr. Mohamed Waheed Hassan Manik’s administration, who was the president after Nasheed.

Nasheed’s submissions for election made past deadline

'Removal of members will be reason for Pres' defeat'

Nasheed: Accusing one another is ‘ugly’