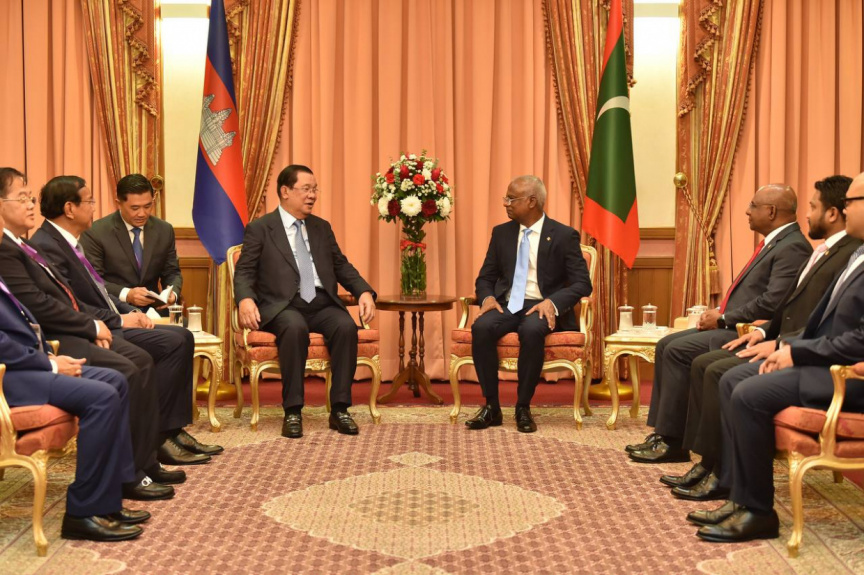 Maldives and Cambodia have signed an agreement on mutual exemption of visa requirements.

In a joint press conference after the meeting, President Solih announced Maldives and Cambodia have signed an agreement, which will allow exemption from visas for single or multiple entry, exit or transit for both countries' nationals, for a period of 30 days.

However, Maldivian travelers who stay in Cambodia for longer than 30 days, or are in the country for educational, medical or business purposes will need to apply for visa.

President Solih announced the decision to provide internship opportunities for 20 Cambodians in various Maldivian resorts under an experience exchange program.

Maldives also offered Cambodian soldiers the opportunity to take part in the basic diving course by the Maldivian Coast Guard this year, and two scholarships for Cambodian students from the Maldives National University.

Maldives and Cambodia signed six agreements on Monday, including agreements on increasing cooperation in the field of health, tourism and economic development.

The Maldives and Cambodia established diplomatic relations on September 21, 1995.

It is Prime Minister Hun Sen’s first visit to the Maldives.

'Imports from Cambodia will reduce price of staples'