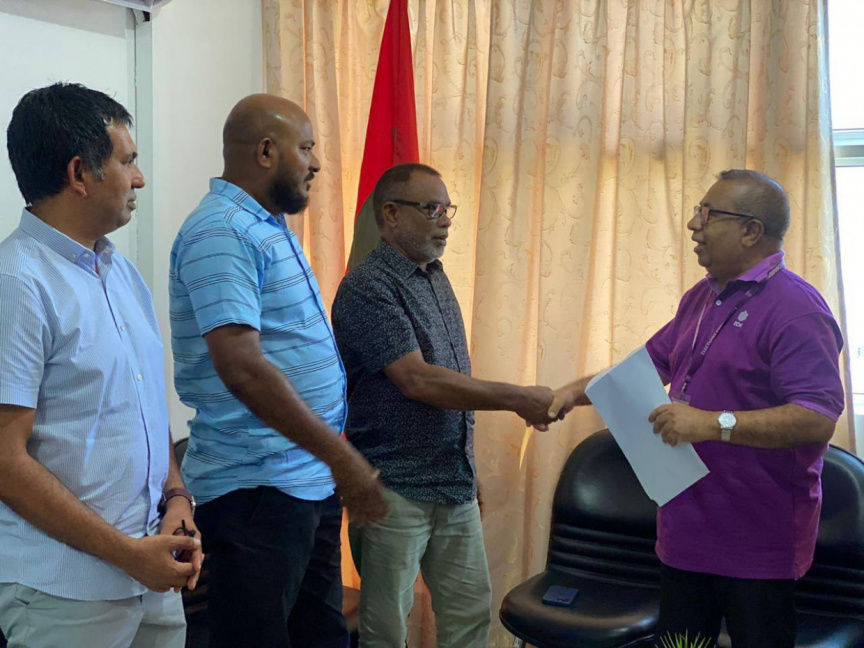 President of the Election Commission meeting with members of the opposition. (Photo / PPM)

The opposition coalition comprising PPM and PNC on Thursday requested the Election Commission (EC) to clarify the extent of Indian influence on the commission.

The leaders of the opposition coalition parties held a meeting with the President of the Election Commission Fuad Thaufeeq regarding this.

During this meeting, the leaders handed over a form with details of the information they need clarifying.

According to the opposition, they submitted the request in accordance with their right to information.

Their request included inquiring whether any discussions have been held or are ongoing with India regarding the work of EC. Moreover, they asked to prove details of any agreements have may have been made with India.

In addition, they requested information on any MoUs signed or that are planning to be signed with India, and if any staff from the commission has been or is scheduled to be sent to India for any training.

Furthermore, they asked to know if any Indian delegation had partaken in any work done by EC at any level.

The opposition also wanted to know if any equipment gifted by India was used in anything related to voting.

When questioned regarding this, Fuad said to Sun they have received a form requesting information from the opposition.

"They [opposition] met [with me] today. They also submitted the form as per the guidelines. They wanted to hand over the form directly to me."

Fuad also said they the information requested will be provided in accordance with the law, and that the work was ongoing for that now.

The opposition has been maintaining their claim that India has influenced various institutions of the government.