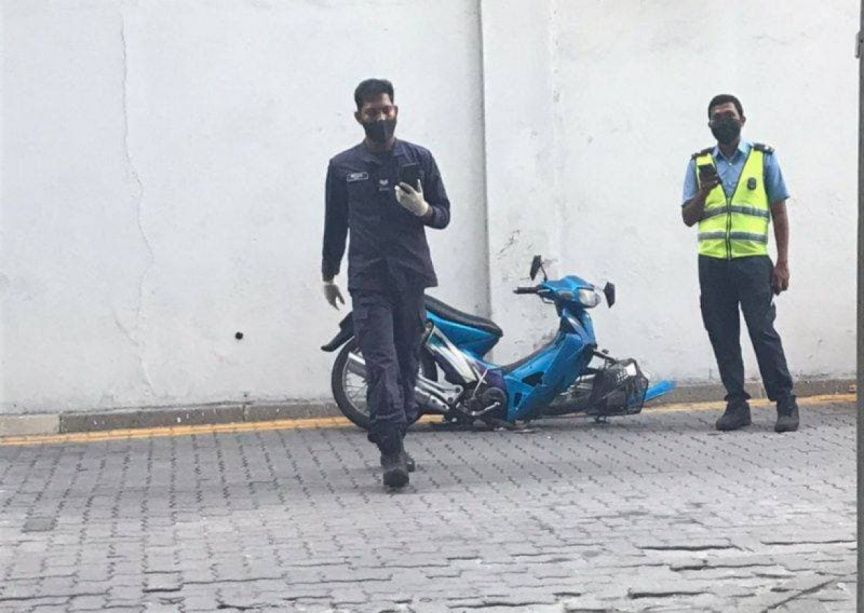 Motorcyle which crashed onto Mulee'aage wall from which alcohol was seized on January 13, 2021.

Alcohol has been seized from a bag hung on a motorcycle which hit Mulee'aage wall.

A media official from Maldives Police Service said that a motorcycle which was speeding at Majeedhee Magu was asked to stop – however the driver had refused. Following this, the driver had sped through to Alikilegefaanu Magu, where he lost control of the cycle and hit Mulee'aage wall.

The media official detailed that a Bangladeshi man was injured in the accident which took place at around 16:30pm this evening. It was also noted that he has been brought under police custody, alongside the alcohol found in the bag hanged on the cycle, and is current being treated at India Gandhi Memorial Hospital.

Police did not disclose the number of alcohol bottles found in the bag. However, they noted that they are investigating the case further.

Prior to this, alcohol and drugs have been seized from motorcycles getting into accidents.

Police allowed to do postmortem in mysterious deaths

Man wanted in connection to ‘India Out’ graffiti

4 people under investigation for ‘India Out’ graffiti

Komandoo by-election debate to be held on January 25