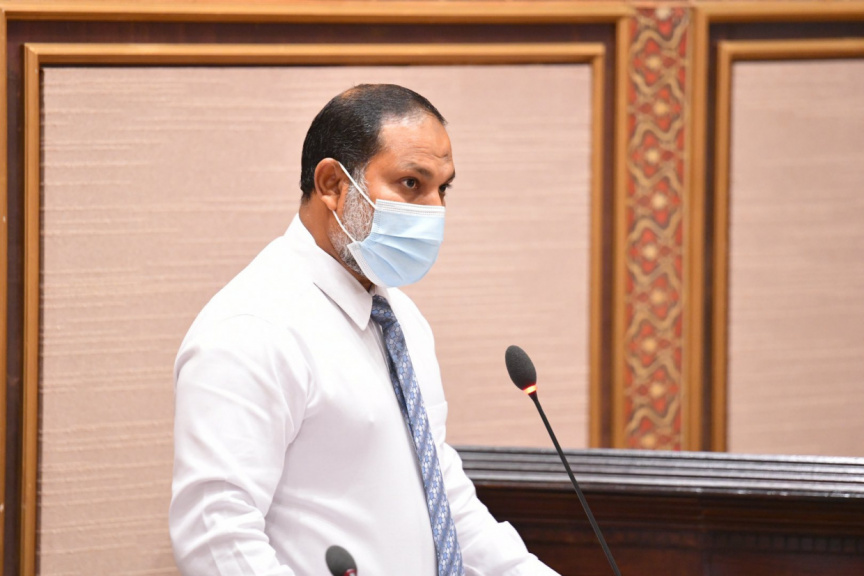 Home Minister Imran Abdulla responds to questions at the Parliament on May 24, 2021. (Photo/People's Majlis)

Minister of Home Affairs Imran Abdulla has stated that the government was targeting to use of body cameras for police officers in 2021.

A pilot training program was conducted in February of last year for the use of body cameras by the police force. However, police have not yet officially begun to use body cameras on duty.

Minister Imran was questioned in the parliament today by MP for South Galolhu Mickail Ahmed Naseem over why the police were not using body cameras while on duty instances such as dispersing protests. The Minister answered the question in writing by saying that Maldives Police Service was in the process of procuring body cameras and that the decision to use body cameras had already been made on a policy level.

The Minister said that the delays were due to the budget constraints of 2020, and added that the expenditure for the body camera procurement was included in the budget for this year. The Minister said that a pilot program was commenced to procure 1,400 body cameras and based on the reliability of the equipment, the Tender Board was submitted a proposal for single-source procurement from a company in the USA, for the Axon brand body cameras.

The Minister further stated that the Tender Board had rejected the proposal on May 5.

"I would like to state that it is a target of the Maldives Police Force and Ministry to procure and use body cameras," said the Minister.

Commissioner of Police Mohamed Hameed has previously said that the use of body cameras would further enhance and develop the police service of the Maldives. It would reduce public complaints about police misconduct in communicating with the public and increase public faith in the police force, according to the Commissioner.

''I will not orchestrate the release of a prisoner''