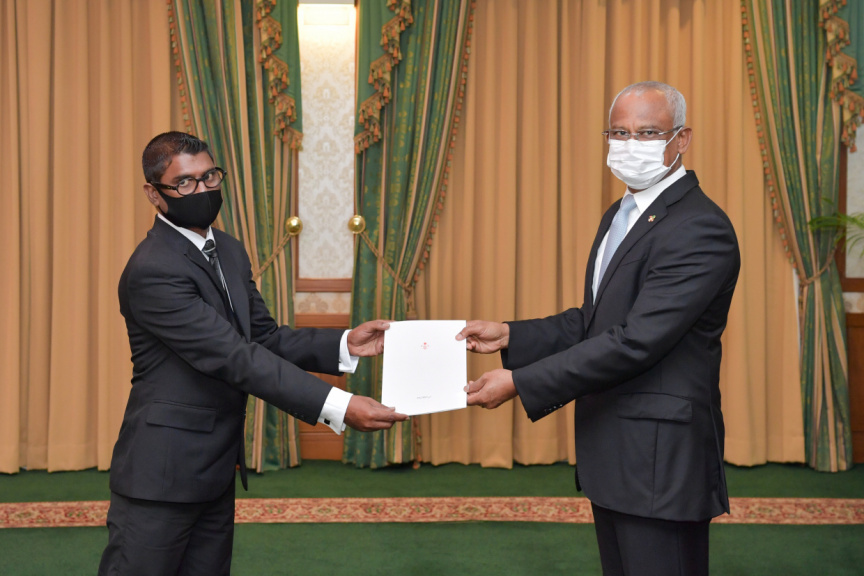 Mohamed Fazeen (L) is presented with his letter of appointment as a member of Maldives Broadcasting Commission by President Ibrahim Mohamed Solih (R) on March 7, 2021. (Photo/President's Office)

Mohamed Fazeen has been appointed as vice president of Maldives Broadcasting Commission (BroadCom).

According to a BroadCom member who spoke to Sun, Fazeen was appointed to the position Thursday.

Fazeen, a former reporter for RaajjeTV, was appointed as a member of BroadCom on March 7, 2021.

Fazeen replaces Ahmed Gais, who resigned from the commission on January 9, stating that he wished to take time to campaign for President Ibrahim Mohamed Solih in the upcoming MDP primary.

Applications are open for the position of member of BroadCom left vacant with Gais’ resignation.

Interested candidates have been asked to submit their applications to the President’s Office between 09:30 am and 12:30 pm on January 22 and January 23.

Reliance on trusted sources urged for reporting on fire

Over 170 applications put forth for BroadCom awards

MTCC stopped from setting up power panels in Vilimale'