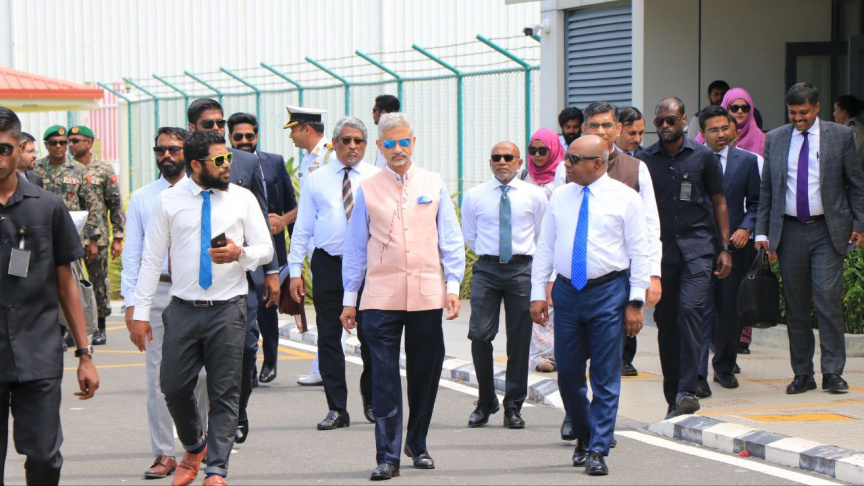 His flight landed at the Maafaru International Airport on Wednesday afternoon.

Jaishankar was received at the airport by his Maldivian counterpart Abdulla Shahid, other top officials from the Maldivian Foreign Ministry, and the president of the N. Atoll Council and members of N. Maafaru Council.

During the visit, Jaishankar will participate in the groundbreaking ceremony of the project to develop the Hanimaadhoo International Airport.

The project, financed under the credit line agreement signed between Maldives and India in 2019, will see the construction of a 2.46-kilometer runway and a passenger terminal with the capacity to accommodate 1.3 million passengers each year.

Jaishankar will also call on Maldivian President Ibrahim Mohamed Solih – who is also travelling to Hanimaadhoo for the groundbreaking ceremony later Wednesday - and Shahid.

According to the Maldivian Foreign Ministry, Jaishankar and Shahid are scheduled to hold official talks and witness the exchange of several Memorandums of Understanding between the two countries in a ceremony in N. Manadhoo.

Jaishankar will also participate in the inauguration ceremony of the Sh.Foakaidhoo Community Center, and visit HA. Utheemu and tour the historical sites in the island.

This is Jaishankar’s fourth visit to the Maldives, in his capacity as the Indian External Affairs Minister. His last visit was in March 2022 to Addu City.