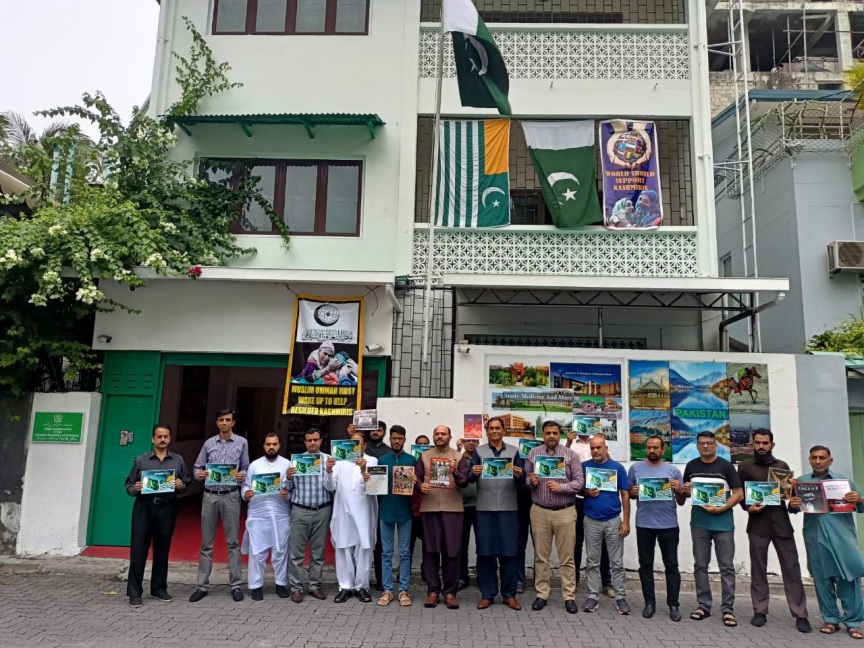 The High Commission of Pakistan in the Maldives, on Friday, celebrated Youm-e-Istehsal (Day of Exploitation) in solidarity with Kashmiris

Pakistan marks August 5 as Day of Exploitation in protest of India’s unilateral strike down of Articles 370 and 35A of the Indian constitution on August 5, 2019 – which are provisions of the constitution gave which gave special status to Kashmir.

Pakistan stresses that this is a blatant violation of the Shimla Agreement between the two countries and the United Nations Security Council's binding Resolutions 47, 51, 80 and 91, which embody the principle that "final disposition of the state of Jammu and Kashmir will be made in accordance with the will of the people expressed through the democratic method of a free and impartial plebiscite conducted under the auspices of the United Nations (UN)."

Pakistan High Commission said that they marked the occasion in Male’ City to express solidarity with Kashmiris as well as to invite attention of the international community of India’s unilateral actions on August 5, 2019.

Speaking at the function, Deputy High Commissioner Zulqurnain Ahmad appreciated the guests’ sentiments and spirit for their Kashmiri brethren in their just struggle for right to self-determination. He also stressed that Articles 370 and 35A of the Indian constitution provided important legal protections that restricted non-Kashmiris from getting jobs, purchasing land and permanently settling in Indian-occupies Jammu and Kashmir.

The Deputy High Commissioner also paid tribute to the Kashmiri leaders, who sacrificed their lives for their right of self-determination.

He also reiterated that Pakistan’s ultimate objective remains the peaceful resolution of the Jammu and Kashmir dispute in accordance with the relevant resolutions of the United Nations Security Council and wishes of the Kashmiri people.

High Commissioner Mukhtar also spoke at the ceremony – during which stressed that the human rights situation at Jammu and Kashmir had seriously deteriorated over the last three years and its people continue to be deprived of their fundamental rights and freedoms.

“We have no doubt that durable peace and stability in South Asia can be achieved only through peaceful resolution of the Jammu and Kashmir dispute, in accordance with the UNSC resolutions and the wishes of the Kashmiri people,” he added.

During the function, a documentary was also shown highlighting alleged human rights violations in Jammu and Kashmir.

Pakistan HC: 48th OIC-CFM will be a landmark session

Pakistan HC urges to honor promises made to Kashmiris