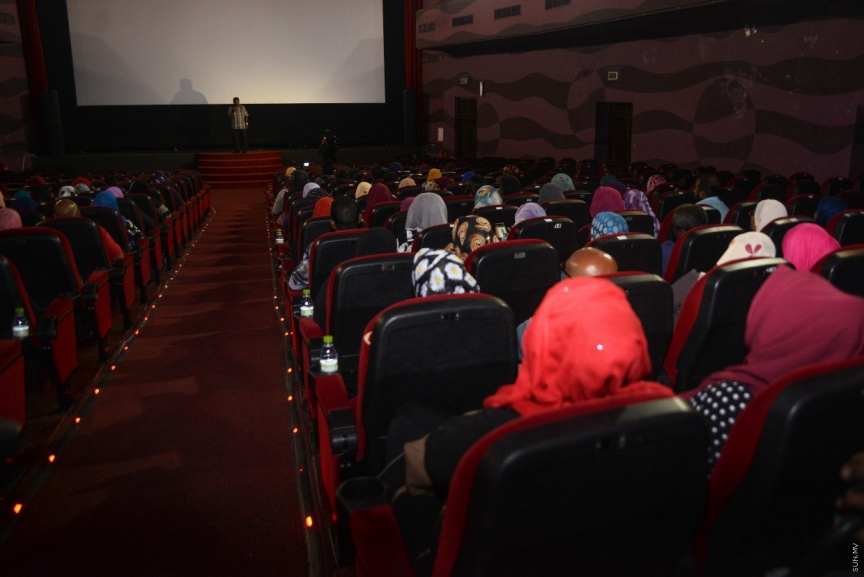 Photo shows the inside of the Olympus movie theater in Male' city. (Sun Photo/Mohamed Afrah)

National Centre for the Arts (NCA) has revealed that efforts are underway to complete the development of Olympus Cinema and recommence its services with modern equipment by the end of this year’s September.

In a statement released by NCA, they stated that a party has been contracted to make the changes necessary to internal walls within Olympus in order to transform the space on west side of the property previously used as an ATM to a canteen. This work includes puttying and sealing the canteen walls.

Noting the completion of the development of a surveillance control and management room in Olympus hall – NCA said that Bid Committee is currently undertaking the necessary works in adherence to laws and regulations regarding a proposal submitted by a party on April 18 for a single source bid on the provision and installation of projectors and surround sound system required for the hall.

Detailing that announcements were made on three occasions to acquire the screen required to screen films in the cinema – NCA stressed that the proposals received were higher than the budgeted amount. However, they stressed that a proposal has been by a party on July 7 for a single source bid on the provision of the screen which is also being evaluated by the Bid Committee.

In their statement, NCA said that some parties contracted for different tasks pertaining to the refurbishment of Olympus Cinema had been unable to carry them out over delays in the arrival of materials ordered from abroad in light of the COVID-19 pandemic and Russia-Ukraine war. The alters to voyage of sea vessels, hike of oil prices and other goods were cited as reasons delaying the acquirement of materials for the project which effectively raised the prices of the ordered goods – prompting budget constraints.

Olympus Cinema is being upgraded with a grant issued by the Indian government for ‘High Impact Community Development Projects’.

The grant agreement between Maldives and India was signed on October 21, 2021.

The Cinema in Male’ City is 67 years old – first having begun screening films in 1957.

'To take action for misconduct of accredited programs'