PPM deputy leader: Return ‘India Out’ banner in three days, or we will go to court 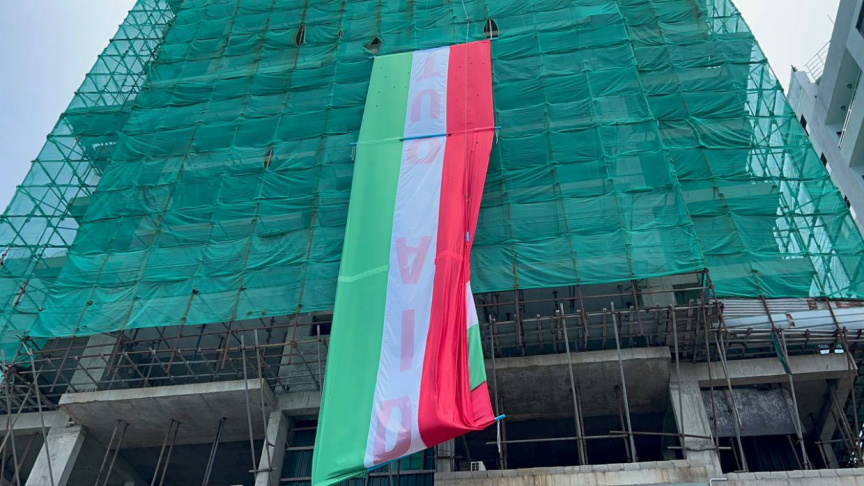 Progressive Party of Maldives (PPM) deputy leader, Ahmed Shiyam has issued a three-day ultimatum to the police to return the large ‘India Out’ banner they confiscated from the residence of the opposition leader, former president Abdulla Yameen Abdul Gayoom, back in April, warning that the party would lodge a case with the court if the police failed to return the banner.

Police had removed the banner hanging from Yameen’s residence, Dhoovehi in Henveiru district of Male’ City, on April 21, shortly after President Ibrahim Mohamed Solih issued a decree banning the ‘India Out’ movement.

Yameen had filed a case with the High Court over the incident.

The High Court ruled in favor of Yameen and quashed the warrant on Sunday.

PPM has demanded that the police return the banner.

Shiyam, who represents the Naifaru constituency at the parliament, said that the banner belonged to PPM, and was prepared at huge expense. He said that it was likely the police had destroyed the banner.

“In any case, it shouldn’t be destroyed. It’s the property of a political party. We condemn it in the harshest terms if they had indeed destroyed it,” he said.

Shiyam said that party officials were told when they went to the police get the banner that they would get it back in two to three days.

“As per standard protocol, items confiscated must be returned within three days. So, we will wait for three days. And we will go to court if we don’t get it back in three days,” he said.

Shiyam said the High Court ruling proved the party had the right to use the banners.

The High Court decided on Sunday that though the Criminal Court issued the warrant on suspicion of disorderly conduct, the police failed to establish the act.

The court also said that the reason for a search and seizure warrant must be clear when issuing such a warrant, but how the police reached to the warrant wasn’t established.

The ‘India Out’ movement is a political campaign led by the opposition to protest against Indian military presence in Maldives.

President Solih declared in his decree that the ‘India Out’ movement was a threat to national security.

All state institutions have been instructed to enforce the decree.

PPM has filed a lawsuit over the decree, calling the move an infringement on the right to freedom of expression.