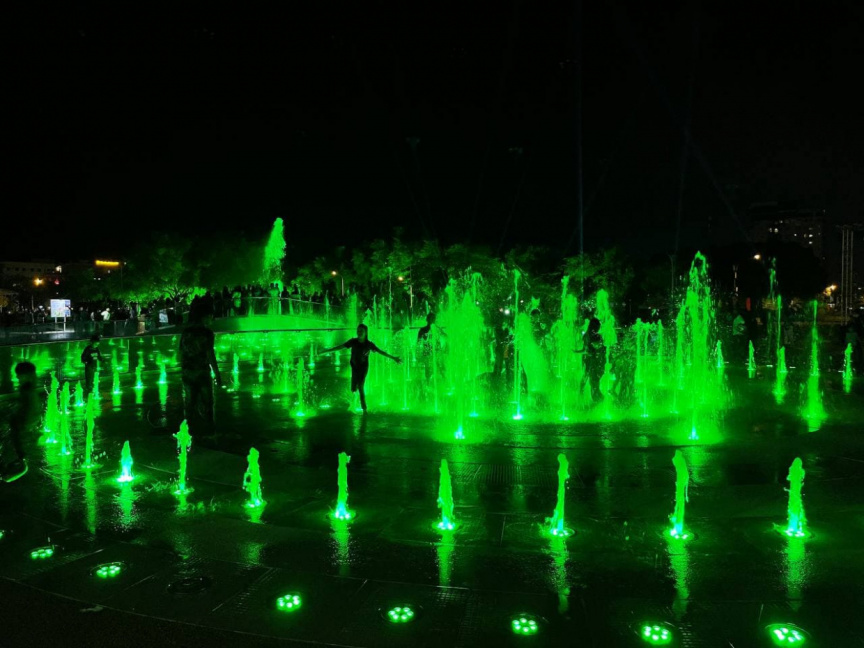 The largest musical fountain ever built in the Maldives has been displayed at Central Park, Hulhumale' last night.

The display of the fountain was inaugurated by the Fisheries Minister of Maldives, Dr. Hussain Rasheed Hassan.

The fountain was built in an area measuring 20,021 feet with water flowing in multiple speeds in accordance to various music, colors and lights. Notably, the water shoots up to 15 feet.

Speaking at the commencement ceremony, Minister Dr. Hussain Rasheed Hassan encouraged to practice polite etiquettes in a civilized society. He elaborated stating that with development milestones polite actions must be evident amongst the members of the community.

"We must be careful not to destroy premises where monuments like this are built by doing activities like littering. It must be each and everyone's responsibility to stop such actions," he said.

HDC's Managing Director Suhail Ahmed also spoke at the function saying that many efforts are been put to make Hulhumale' a pleasant city. Moreover, he stated that with the increase in the number of people settling at the Hulhumale’ second phase building projects efforts are being put to introduce excellent, new facilities at the area.

With fast paced changes taking place, his aim is to ensure the involvement of everyone in the process of executing development plans.

Highlighting the work of HDC, he stated that currently important efforts are being put to introduce and establish basic and other services at Hulhumale'. These efforts will continue in the future as well. Further work is being put to extend the urban farming area and build a mosque near central park.

The Central Park is divided into four zones. They are the fountain zone, leisure zone, interactive zone and recreational zone.

2nd temporary mosque to be built at Hulhumale’ Phase 2

Fire breaks out in Hulhumale’ flat

'Steps being taken to counter spread of Christianity'