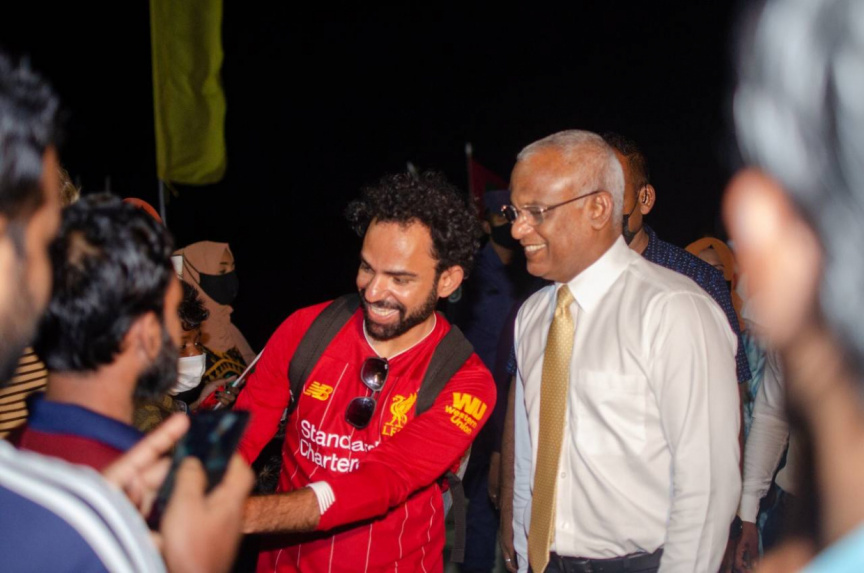 A highlight from President Ibrahim Mohamed Solih’s recent trip to AA. Ukulhas – was the tourist who was among the crowd of people waiting in line to welcome him to the island.

Maldivians were instantly captivated by this tourist; not without reason at that. Everyone had the same thought when they first saw him. This was the renowned football player Mohamed Salah, in the flesh. He was dressed in a Liverpool jersey too.

However, this was an Egyptian tourist, Mohamed Khaleel, who was in the Maldives for holidays.

With his vacation at Ukulhas coinciding with President Solih’s visit to the island – Khaleel has truly attained a one-of-a-kind tourist experience in the Maldives.

He had live-streamed the President’s arrival to Ukulhas on TikTok; to share the once-in-a-lifetime experience with his followers. He also got the chance to have a brief conversation with President Solih – and even took a selfie together.

In an exclusive interview with Sun, Khaleel described President Solih as a very humble person – noting he was just like any other normal Maldivian citizen.

“Maldivian President is a very humble, decent man,” he described.

Khaleel also shed light on the conversation he had with President Solih – adding that even the President had commented on his uncanny resemblance to Mohamed Salah. He said that their conversation ended with the President wishing him an enjoyable vacation in the island nation.

Khaleel said that this was his first time visiting the Maldives. In this regard, he detailed that – adding that he had chosen the destination in light of its famed beauty and the recommendation of his friends’ who had holidayed here.

“It was one of my dreams to come here. My dream has happened now, and Insha Allah, I want to come again and again,” he added.

He further said that the island destination is the best holiday destination to visit for relaxing.

“Maldives is the best place ever to visit. It is my favorite. I can’t describe how great it is,” he said.

Khaleel also commended the hospitality provided to him by locals.

Like Khaleel, the Liverpool star Mohamed Salah is also from Egypt. He captains the Egyptian national team and is praised for playing a huge role in qualifying his country for the world cup.

Salah is also considered one of the best football players in the world.

Dhiguvelidhoo to be developed as tourist resort

Canareef Resort to reopen next week after two years