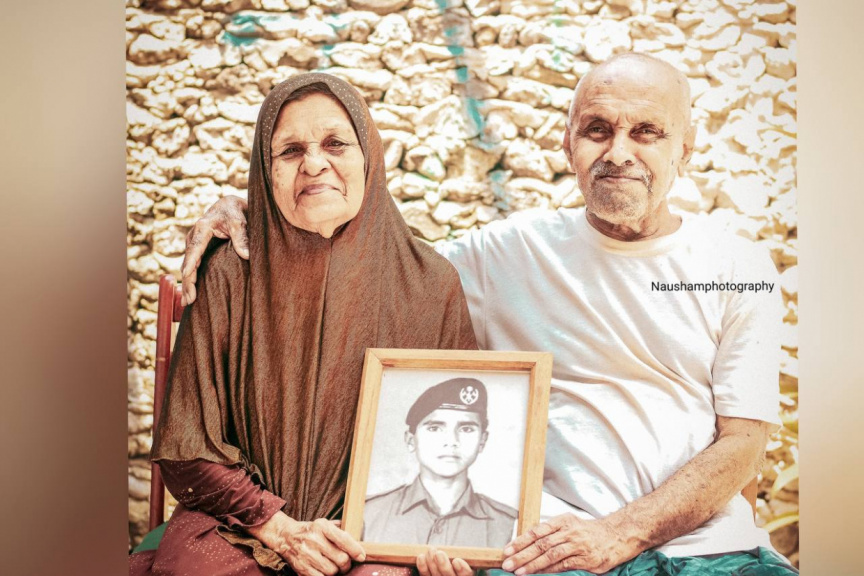 It was the night of November 2, 1988. Male’ City, which was sleeping peacefully was shaken awake at around 3:30 in the morning by the Tamil militant group which crept in.

After setting foot on the Maldivian soil – they took hurried steps east of Boduthakurufaanu Magu and made camp in the corner of then-Air Maldives. Mere seconds after, they started firing at the main gate of the headquarters of Maldives National Defense Force (MNDF). This was the first attack of the coup d’état attempt. The officer posted guard at the gate had immediately fired back in defense.

The first person to fire against the Tamil militants is someone our whole nation is proud of today; Martyr Hussain Adam. Ranked a Lance Corporal at the time – Hussain Adam died after getting shot by the militants when he had ceased his attacks subsequent to his bullets running empty.

Had he not fired in defense that day – there was every chance for the militants to force their way into MNDF headquarters. Therefore – the hero of November 3, 1988, is, Martyr Hussain Adam.

As we mark 33-years since that day – young photographer, Nausham Waheed, was proud to present a photo that tells a magnitude of stories. He, who has been taking conceptual photos on different occasions for a long time, had captured Martyr Hussain Adam’s “proud” parents. The photo shows the parents seated; holding a photo of their son. They are both smiling brightly.

Speaking to Sun regarding the photo, Nausham said that he came up with the idea of capturing Martyr Hussain Adam’s parents for Victory Day during a trip he made to Kulhudhuffushi City earlier this year.

“What I want to depict from this picture is how proud of Hussain Adam his parents are. The colors on their faces are telling just this story,” he explained.

Nausham expressed that he was very happy for having had the chance to capture the couple – even years after the incident had taken place. He described the photo as one of the most historical ones he has captured.

Martyr Hussain Adam’s mother, Aishath Hassan, and his father, Adam Mohamed, are in their 80s now. The couple had given a special interview to Nausham.

They described their son as a “quiet person” since childhood who enjoyed crafting throw errors and doing battle plays.

“I gave birth to a total of thirteen children including him. Only six of them are alive right now,” his mother had said.

She explained that the couple had come to know about Hussain Adam’s death three days after the incident.

“The whole island was in chaos and I was clueless. I had this weird feeling but I had no idea. I asked my husband since he worked at the government shop but he did not know either. We did not know about it until three days later. The event took place on a Thursday. By Saturday, I couldn’t ignore the uneasiness and requested my husband to ask around,” she recounted.

Aishath Hassan said that her husband returned home with the news on Saturday afternoon; severely distressed.

“Our son has died in battle. He is a martyr,” her husband had told her.

She further detailed that due to shock she had passed out – adding that she was unconscious for the 10 days consecutive that followed.

The couple did not have the chance to travel to Male’ to attend their son’s funeral. They had traveled to Male’ for the first time 13 years after the event took place.

“I never went to Male’ until 13 years after the event took place. President Maumoon called us to the ‘Atholhuge’. He talked about Hussain. I could not bring myself to talk. I could not concentrate. My eyes were filled with tears. My eyesight is this bad today because those tears have not left my eyes ever since,” she had said.

The story of Victory Day is one that should be told to the young generation of today. Nausham’s photo definitely tells a part of this story. It revives the memories of one of the darkest days in recent Maldivian history.