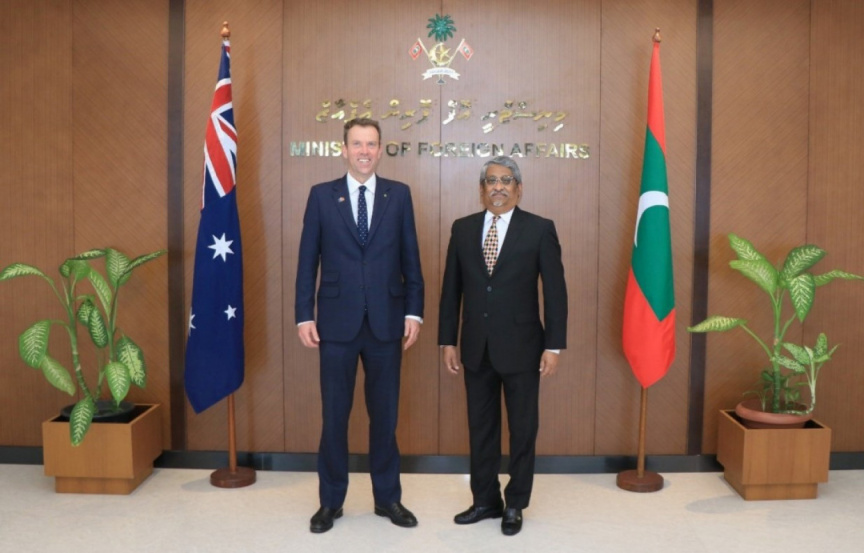 Maldives and Australia have held discussions to strengthen bilateral cooperation between the two countries in the areas of economic and trade cooperation, education, people-to-people contact and environment and climate change.

The discussions took place during a meeting held between the State Minister for Foreign Affairs Ahmed Khaleel and Australia’s Minister for Trade, Tourism and Investment Dan Tehan yesterday – as part of Minister Tehan’s official visit to the Maldives.

Both of them discussed a wide range of issues that is of mutual interest to the Maldives and Australia.

One of the most important matters discussed in this regard was to further strengthen the existing bilateral ties between Maldives and Australia. Areas of interest to both countries in which ties could further be strengthened in which were highlighted at the meeting were economic and trade cooperation, education, people-to-people contact and environment and climate change.

During the meeting, State Minister Khaleel also thanked the Australian Government for the multiple contributions made to assist the efforts to control the COVID-19 outbreak in the Maldives.

In concluding the meeting – State Minister Khaleel and Minister Tehan reassured commitment towards working closely on furthering collaborations on the multilateral front.

Both of them were joined by senior officials of the Foreign Ministry during this meeting.