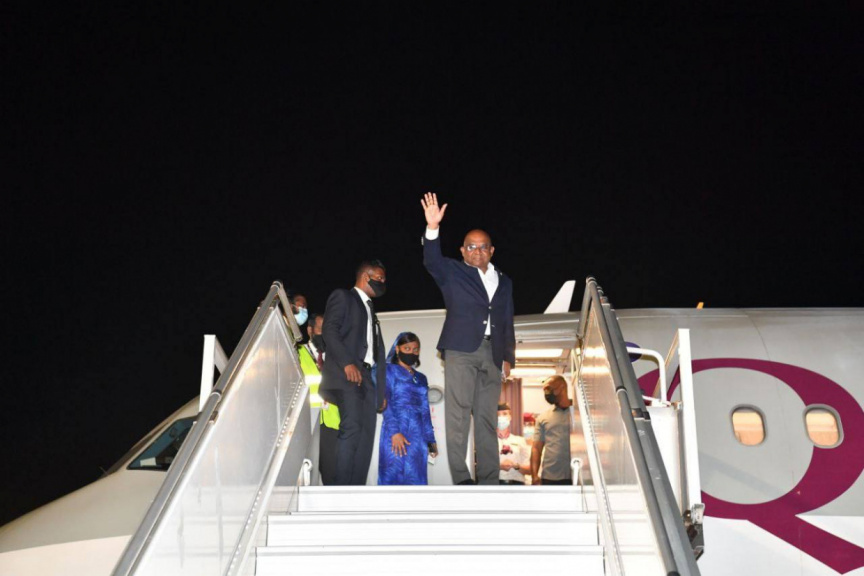 President of the 76th session of the UNGA, Maldivian Foreign Minister Abdulla Shahid waves as he boards a plane out of Maldives on October 9, 2021. (Photo/President's Office)

President of the 76th session of the United Nations General Assembly, Maldivian Foreign Minister Abdulla Shahid has concluded his official visit to Maldives.

He was seen off from Velana International Airport (VIA) by President's Office Chief of Staff Ali Zahir on Saturday evening.

Shahid arrived in Maldives on an official visit at the invitation of President Ibrahim Mohamed Solih last Wednesday.

Shahid was presented with the Order of the Distinguished Rule of Izzuddin during the official function to mark this year’s National Day – in acknowledgement of his national service in boosting the foreign sector and bringing pride to the Maldives in the international arena.

In a tweet on Saturday evening, Shahid said that saying goodbye to Maldives was always difficult.

Shahid also said that the top priorities for Maldives - climate action, inclusive multilateralism, sustainable development - are aligned with his own agenda.

He also thanked everyone who supported his visit.

“I wish to thank the everyone who supported the visit - from the security officials, to government officials, liaisons at every venue, and finally the exceptional #TeamKhaarijee!” he said.

Shahid’s next stop is to Belgrave, where he will attend a high-level commemorative meeting of the 60th anniversary of the Vietnam War.

Shahid took office as the President of the 76th session of UNGA on September 14.

'Together, humanity can deal with climate change'

Shahid back at NY after concluding 1st official trip