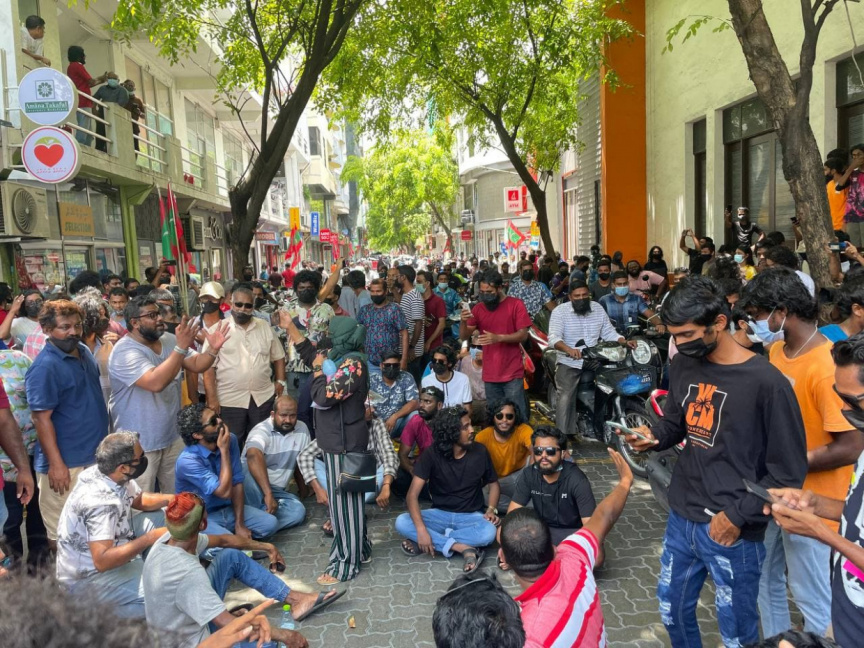 Football Association of Maldives (FAM) has been accused of fraud in the sale of tickets for the SAFF Championship fixture between Maldives and Sri Lanka scheduled for Sunday, angering scores of football fans who waited in queue for hours to buy tickets.

Tickets for Sunday’s fixture was scheduled to open at 10:00 am this Saturday, but scores of eager fans formed a long queue outside the national football stadium in Galolhu district of Male’ City as early as 07:00 am.

However, approximately an hour after the sale of tickets began, FAM officials announced that the tickets had been sold out.

Football fans, alleging that there was no way tickets to a 5,000-seat stadium could run out in an hour, broke through the door of the ticketing office and forced their way into the stadium.

They got their hands on the records, which showed less than 600 tickets had been sold. Angry fans demanded to know where the remaining 4,000 tickets went.

Clashes ensued as some of the fans entered the stadium. They have blocked the capital’s main road - Majeedhee Magu – and have begin a sit-in, demanding the resignation of FAM’s president Bassam Adheel Jaleel.

FAM announced in a statement on Saturday afternoon that 2,500 tickets had been reserved for players’ families, sponsors and clubs.

The association did not specify how many tickets were allocated for sale to supporters.

FAM said that in response to public concern, it has decided to sell an additional 1,000 tickets out of the 2,500 tickets reserved by the association to supporters.

The tickets are scheduled to be sold at the social center located in Maafannu district starting 08:00 pm.

Each person will be sold just one ticket.

National team to camp in Qatar before SAFF Championship