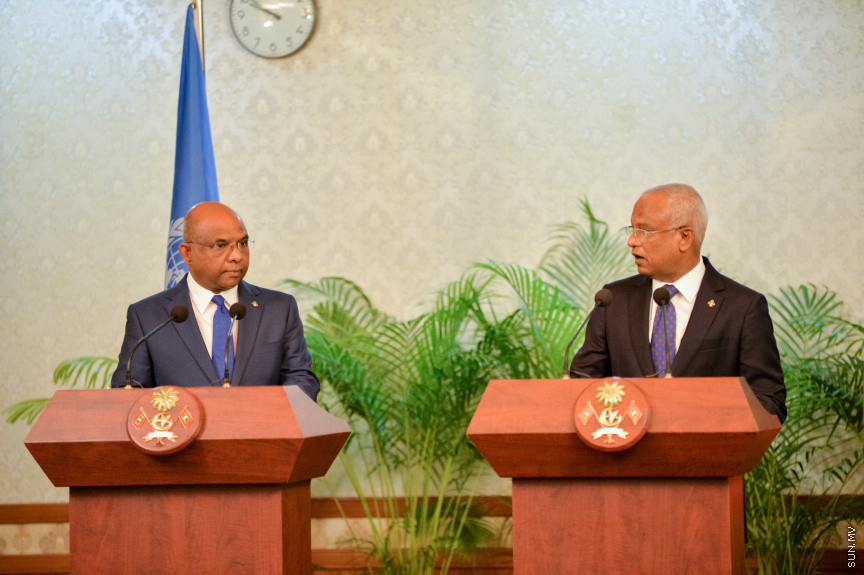 PGA Shahid arrived in the Maldives on an official visit earlier this morning – following which he had called on President Solih. An array of matters of global and local interests were discussed between the two during this meeting. Concluding the call – PGA Shahid and President Solih held a joint press conference at the President’s Office.

Speaking at the press conference, President Solih noted that Maldives has always considered reforming the work carried out by UN bodies in line with the evolving changes to the society as important – adding that the country has always been a strong advocate regarding the matter.

“Therefore, in the course of our discussions, I had requested that reform work of the UN be expedited during his (Shahid’s) tenure,” President Solih had said.

“Achieving strides in efforts to reform the General Assembly and the Security Council was noted to be especially important,” he added.

President Solih also said that he stressed the importance of advocacy for Small Island Development Stated (SIDS) such as the Maldives in the international arena – during this meeting. In this regard, he requested seeking ways to facilitate easements to loans granted for SIDS which continuously suffer blows to their economies.

He also said that he had thanked all UN bodies for the assistance rendered to the health sector of the Maldives from the onset of the COVID-19 pandemic in the meeting.

Other issues discussed between the two included safeguarding human rights and climate change. In this regard, President Solih outlined the Maldives’ climate goals, requesting aid from the PGA in this endeavor – whilst underscoring the need for multilateral support to build sustainable climate resilience and achieve the goals.

“Noting that the UN General Assembly is a representative body of all the countries in the world – I had appealed to PGA for constructive efforts to be made with respect to these matters,” President Solih added.

During the meeting – Shahid said that his election as the PGA was attributed to the successful foreign policy of President Solih’s administration, and for that reason, extended his gratitude towards him. Pointing out that his ‘Presidency of Hope’ and ‘Five Rays of Hope’ were inspired by the Maldives, stating that he remains committed to progressing the UN under the Maldives’ Presidency of the GA, and promoting the Maldives’ priorities in the international arena.