Ministry: Will take legal action against parents if Hirilandhoo school students are not sent back to school following discussions 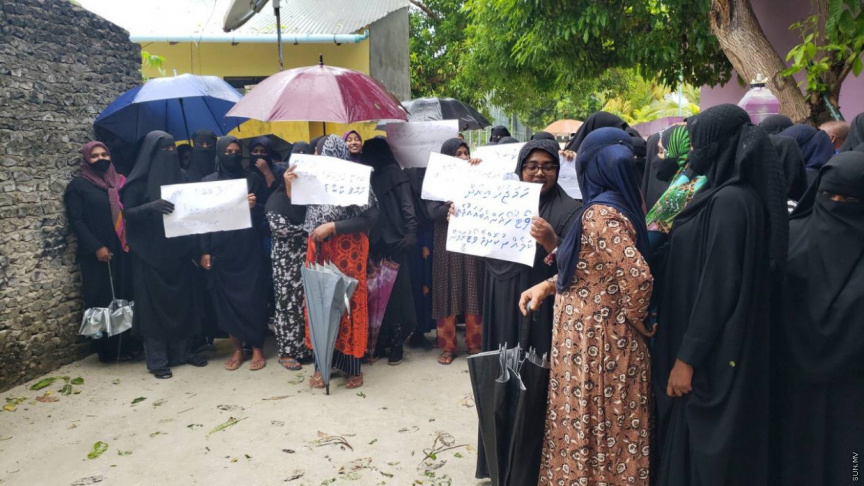 Education Ministry has stated that legal action will be taken if parents of Th. Hirilandhoo School students refuse to send them back to school even after holding discussions with them.

On last Wednesday and Thursday, parents of Hirilandhoo School students had locked the school gate in protest – refusing to send their children to school – expressing their anger over the failure to address the difficulties faced by the school as well as the obstruction to carry on with classes when there is heavy rain.

Speaking to Sun today, Education Ministry’s Permanent Secretary Ahmed Ali stated that the parents had been cautioned on the first day as well for locking the school gate and refusing to send their children to school.

“While they had been already cautioned even the first time – the next day was the same as well. They had locked the school gate and once again were protesting in front of it. Their demand is that they will not let the school reopen until a tender for the establishment of a multipurpose hall in the school is immediately announced. We have informed them that this is not something we can do on the spot,” he detailed.

He further added that the laws do not permit anyone to close schools in a manner that will adversely impact students – and that if parents continue to repeatedly be in violation of this, the Ministry is probing into legal actions which can be taken against them in this regard.

“Even to solve the matter within the confinements of the law – we do not wish to take action against anyone in a way that they will be adversely impacted. We are prioritizing solving the issue by holding discussions first. If we are unable to do this – Ministry of Education will discuss with the relevant government authorities and take the necessary actions needed,” he had said.

Speaking further, Ahmed Ali noted a month or so will be approximately taken in order to arrange for the tender regarding a multipurpose hall. He added that the current solution is to continue the classes as previously conducted – by dividing the students into two sessions – and that the school has already been informed of this.

Students in four grades at Hirilandhoo school are taught in a hall built by the island residents in the year 1992. The hall does not have doors – and its roof is in poor condition with holes in them, allowing water to be leaked inside when there is heavy rain, wetting students and study materials they use.

'Indian teachers being harassed on roads'

Graffitiing ‘India Out’ at school wall being probed