MNU publicizes book on the history of education in the Maldives 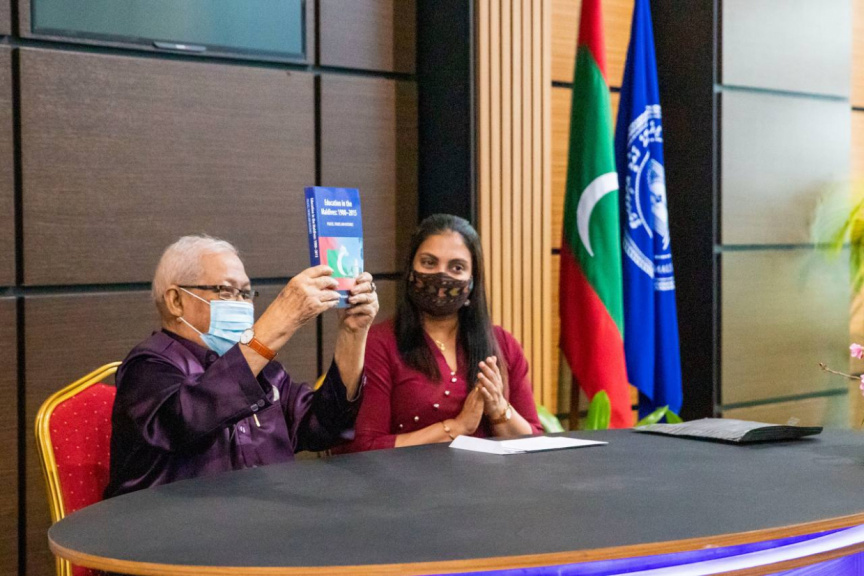 A capture from the ceremony held to release the book titled ‘Education in the Maldives 1900 – 2015: Policies, Themes and Outcomes’ on September 1, 2021. (Photo/MNU)

Maldives National University (MNU) has publicized a book on the history of education in the Maldives earlier today.

The book titled ‘Education in the Maldives 1900 – 2015: Policies, Themes and Outcomes’ was released during a special ceremony held at MNU. It is authored by the Education Minister Dr. Aishath Ali, MNU’s Chancellor Dr. Hassan Hameed and Dr. Leslie Widowich.

Speaking at the ceremony, Minister Aishath Ali noted that the book primarily focuses on policies utilized in the making decision on the education system during the 20th century.

“The book is mainly about the policies utilized in the 20th century in order to sculpt the education system. Why these policies had come in force. How the policies had been developed and enforced as well as the subsequent outcomes,” she had said.

The ceremony was special guested by renowned Dhivehi linguist Abdulla Soadhiq (Soadhube) – who also addressed the ceremony. Accordingly, he stressed the importance of the publication of books beneficial to the country in different areas.

“In order to encourage authorism within the University – two initiatives have been launched this year. One is to financially assist students and employees from the University who are interested in authoring books – to accommodate some of their needs. We have allocated about MVR 1 million for this – just for this year. This is to encourage authorism and publication of books within the University – as well as to fund such projects. The second thing we are doing in the publication of books,” she had said.

She also expressed that she hopes to see many books being publicized by the University in the future.

'Dhapparu will be developed for real estate tourism'