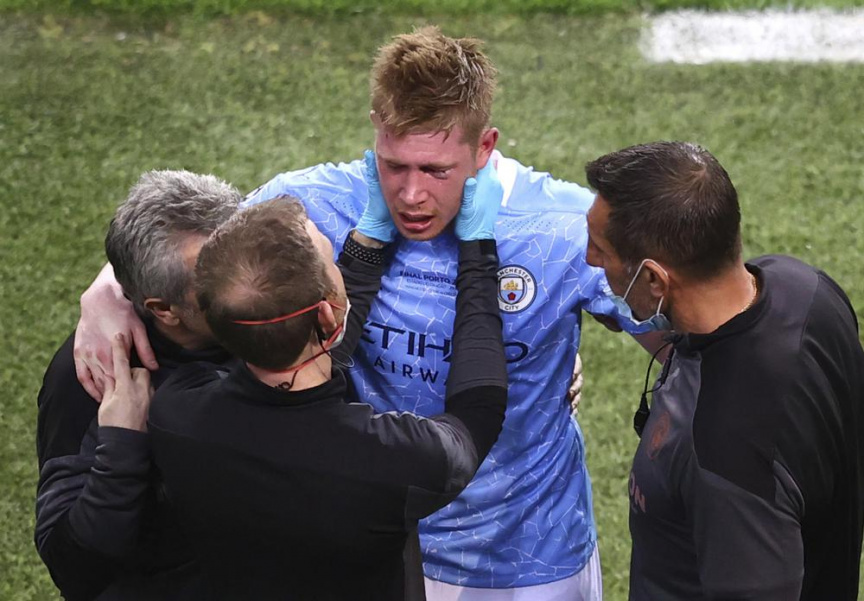 Manchester City's Kevin De Bruyne is assisted after a foul by Chelsea's Antonio Rudiger during the Champions League final soccer match between Manchester City and Chelsea at the Dragao Stadium in Porto, Portugal, Saturday, May 29, 2021. (Michael Steele/Pool via AP)

TUBIZE, Belgium (AP) — Kevin De Bruyne does not require surgery after fracturing his nose and eye socket and will join the Belgium squad next week ahead of the European Championship, coach Roberto Martinez said Monday.

The 29-year-old De Bruyne sustained the injuries in a collision with Chelsea defender Antonio Rudiger while playing for Manchester City in the Champions League final on Saturday. De Bruyne had to be replaced in the 60th minute of the match, won 1-0 by Chelsea.

Martinez told a news conference from Belgium’s training camp that the prognosis for De Bruyne was encouraging and that the playmaker will link up with the squad after a few days’ rest.

Martinez said he was not sure if De Bruyne would be ready for the team’s first match of Euro 2020, against Russia on June 12.

The Belgian FA is expecting De Bruyne to be with the squad by next Monday, but only after taking tests to check his injuries are healing OK.

Ronaldo to play against Newcastle

SAmericans can play in EPL despite missing WC qualifier