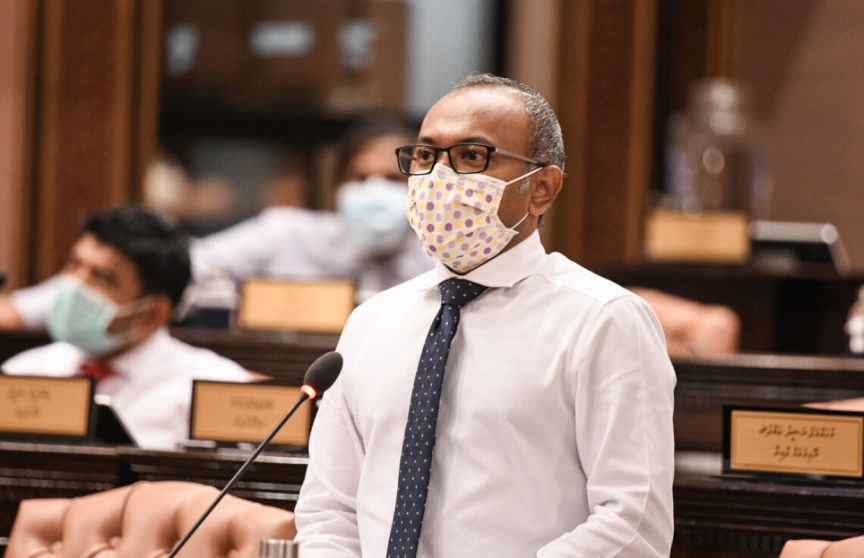 West Henveyru MP Hassan Latheef wears a mask to protect from the spread of the new coronavirus as he attends a parliamentary sitting on May 26, 2020. (Photo/People's Majlis)

Chairperson of MDP and MP for West Henveiru Hassan Latheef has warned the Home Minister Imran Abdulla against impeding the arrangements of the Parliament.

The Parliament erupted in chaos on Monday night, during a session where the important vote for a proposed amendment to the Constitution was on the agenda.

The session was held early in the morning at 1:30 and was disrupted soon by MP for Naifaru Ahmed Shiyam, who, his party PPM said was raising a point of order.

The commotion caused by MP Shiyam had led Speaker Mohamed Nasheed to announce his name three times, which according to Parliament regulations, means that the MP is to leave the parliament floor.

However, the situation descended into chaos with governing MDP MPs captured on video forcefully removing MP Shiyam from the floor.

Several MPs were observed breaking social distancing and health safety guidelines issued by the HPA to the Parliament to be practiced during sessions.

The incident was lodged with the Police by the opposition PPM, who later issued a statement saying that MP Shiyam had suffered a broken rib due to the altercation.

Speaking in a program of PSM last night, Home Minister Imran Abdulla had said it was his firm belief that investigating the incident inside the Parliament justly and taking action against any wrongdoers, was a duty upon the Police.

A tweet issued by MP Hassan Latheef issued today, read that the political party of Home Minister Imran Abdulla had no support from the public and pointed out that the party had failed to secure a single seat in the Parliament in the last elections.

“Sheikh Imran must not have the ideology to impede and obstruct the system and arrangements of the Parliament when having failed to secure a single seat.” Said MP Hassan Latheef.

Home Minister Imran Abdulla’s Adaalath Party is a member of the ruling coalition alongside the main party MDP.