Health Minister Ameen: End result of expenses, saved and will save thousands of lives 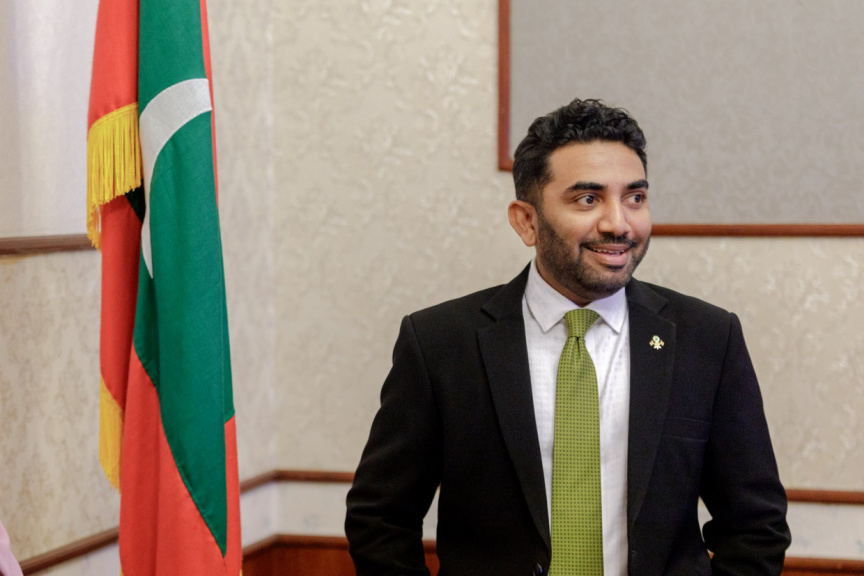 The number of countries that have triumphed over the fast-spreading COVID-19 pandemic virus in the world are indeed very few.

The pandemic has brought powerful nations such as the US and countries in Europe as well as China to its knees in a short span of time. What was predicted of the Maldives, a small island nation with limited resources, was also a similar situation of devastation.

The Maldives was also forced to confine the entirety of its population to their homes in order to conquer the virus. Sources of income and foreign currency into the country dried up quickly, and the government was forced to make expensive decisions in a short period of time.

The total expenditure of the country for the virus is now closing on a billion, with current expenditure levels at MVR 873.3 million.

Some have described the figure as disproportionate. Many in the opposition see this as accomplishing nothing more than establishing “bases”. They firmly believe that the final outcome of this effort is exactly nothing.

However, an interview by one of the figures who is spearheading the country’s war on the virus, Health Minister Abdulla Ameen, saw him respond to these criticisms in an even firmer tone.

The Minister, speaking with Sun, stated that the situation in the Maldives had not disintegrated to a level seen in some other countries such as Italy, Spain, and the US due to these expenditures.

Hospitals in these countries had been overloaded with virus patients, death rates had soared and the number of new infections were increasing day by day. Minister Ameen stated that probably due to the fact that the situation in the Maldives was not as bad as some of these countries, was the reason for some people to make such assumptions.

Assumptions that make it seem that the country would be the same even without these expenditures. Minister Ameen refuted these claims as nothing more than a notion.

Epidemiologists from the Health Protection Agency have predicted that the country could suffer 10,000 deaths, which is no less than two percent of the total population.

The Minister stated that the country narrowly escaped from being inflicted with the predicted figures due to the long term planning and the priority on saving lives by the government no matter the cost.

“I can surely say that the costs spent on this work had returned positive results. If the government had not had the mindset to quarantine and isolate hundreds with these costs, the lives of countless people could have been lost. Large numbers of elderly people would have been taken away from us,”

“We would have been faced with the sad scenario of many families losing their loved ones, had we not worked to test people and familiarize with the virus. The result of the work and expenses have seen us arrive at where we are today.” Said Minister Ameen.

He noted that this was a disaster that the whole world was new to, before adding that there was always room for criticism and improvements. He said that he welcomed scrutiny and oversight from other state institutions in order to be held accountable and responsible. The goal was to listen to this criticism and improve, said the Minister.

The result of testing and quarantine of thousands was to maintain the current numbers of the country. He highlighted the fact that since the country had never faced such a pandemic, expenditure was a necessity to escape from the virus.

Minister Ameen soundly said that any step taken by the government was in light of the advice and recommendations of WHO, medical professionals, and relevant institutions.

“Our primary focus was on saving lives of Maldivians. I have the courage to say that as a result of our work, and from the predicted numbers, we have saved 10,000 lives. What family, what Maldivian would wish to see their loved ones pass away from the virus, with receiving treatment?”

“That is why we cannot stay idly. We will maintain the same work in the future.” Said Minister Ameen.

Minister Ameen said that the Maldives had two targets to move towards in the war against COVID-19. That is to control the virus and gain knowledge about it and to increase the capacity of the health sector to treat patients. This work was being done in a calculated and planned manner, according to the Minister.

“What we spent, what steps we took, we didn’t just go and construct a facility in Hulhumale’. For instance, the Hulhumale’ facility, we started building it with a plan. To increase the treatment capacity. That is not a lost expense. Our investment was the equipment, beds, cupboards needed for the facility. This is not yet over,”

“We calculated for a second surge of cases in the future when we began to build the facility in Hulhumale’. The facility will remain for ages.” Said Minister Ameen.

He pointed out that most of the expenses were on obtaining medical equipment. The migrant worker facilities being built was also because the virus cannot be controlled without resolving the issue of migrants in the country. The issue now has a solution which has eluded it for ages, said the Minister.

“Each of these expenses has a lot of accomplishments. This is not going to waste. The facilities for migrants resolve the issue of overcrowded residences with migrant workers. An issue that has existed for ages is finally being resolved with this. This is what we are accomplishing from this work,”

“The medical equipment we are purchasing, won’t be lost. We can use it for ages in the medical sector.” Said Minister Ameen.

He noted that the initial fear of the virus spreading in Male’ City was that it may get out of hand since the city was the most densely populated in the world.

The closure of borders had resulted in delaying the virus and the lockdown had ensured that it had not gotten out of hand, said the Minister. The compliance received by the public to the advice of health professionals was also another factor that contributed to the positive outcome.

“Take a look at what happened in some other countries. The danger is that this may result in the collapse of the system when it is overloaded with patients that need treatment. But god willing, we have caught the country before it reached that point from the measures we have taken,”

“Just imagine how our situation would be if not. If we had not taken done much. If we had dismissed it as just another flu, we may not be where we are.” Said Minister Ameen.

The current goals are to increase the testing capacity of the country and to implement the plan of treatment for when a situation arises where the virus spreads to other atolls of the country, said the Minister.

“The danger in this is that when the situation in Male’ City and atolls get worse at the same time. That will be a massive disaster. We are trying to avoid that by planning. We are arranging the systems that need to be mobilized for that.” Said the Minister.

Despite the lack of a warning sign that the virus situation in the country could worsen, Minister Ameen said that the country still couldn’t relax. He advised the public to perform individual duties without any leeway and to take the virus as seriously as possible.

“We have not yet conquered the virus. My advice is for the public to follow the advice of health professionals as we learn to live with it in the future. Work against the virus without losing focus. That is how we can overcome this virus together. We would be faced with a sad result if we lose focus.” Said Minister Ameen.

''I did not provide false information to parliament''

Ameen: Communications with WHO were official