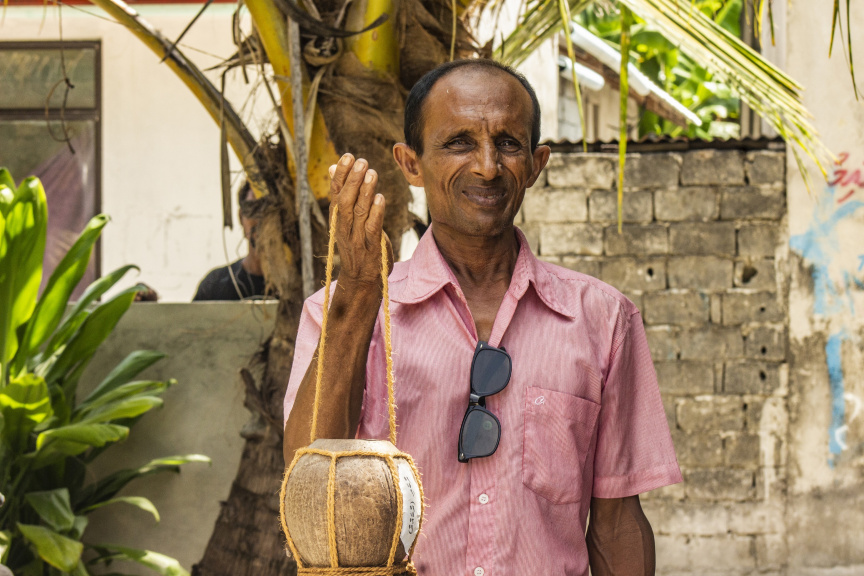 On a fine day 50 years ago, the Katheebu of Gemanafushi saw little Adam Hussain walking home with a raabadhi and mockingly asked, "boy, are you seriously a toddy tapper?". Adam responded by offering a drink of five-day fermented coconut toddy (dhoaraa) to the Katheebu, who was left bewildered by the 14 year-old's spirit and perfect yield.

And Adam went on to continue toddy tapping, dismissing ridicule and underestimation. Today at the age of 64, nobody can beat him at his game. Adam--affectionately known as Adambe--built his whole life on raaverikan and is one of the few locals who still remain on it.

Adambe started taking a keen interest on toddy tapping at the age of 12, upon seeing neighbors and elders of the island work on the palms. In two years, he grasped the know-how of raaverikan, and was up on the coconut palms himself, making a living out of it till this very day.

Though there was a hiatus from raaverikan in his life. At one point, he had to relocate to Male and there was a blurry period of working at the airport and at sai hotaas (local diners). Later he moved back to his home island and worked nine years at the school.

But according to Adambe, those days were never fulfilling--he just was not feeling the joy, nor the gains as he would from tapping toddy. Hence it was decided that he would once again be his own boss and return to work solely with the palms.

He organised his whole life accordingly. Just before the break of dawn, he would go up the palm trees and would be back home by the time daylight takes over. At his peak, he was able to climb 16 coconut palms each day. The repetitive daily routine of climbing never bored him--it was interlocked with his soul. Eventually he pardoned himself from too much work and activity due to his ripening age and displeasure from his children.

Adambe now climbs some eight coconut palms in the morning, right after breakfast. By midday, he would be done with his tasks and back at home. Some days, he would cook toddy into condensed dhiyaa hakuru over woodfire.

Raaverikan requires a sophisticated skillset. To produce the best toddy, one must become devoted to the work and maintain a certain level of patience. It takes at least four to fifteen days waiting (and daily inspections) until collection of yield.

Despite his devotion, Adambe acknowledges the risks of his very strenuous work. Many have toddy tappers have faced the ill-fate of plummetting down the palms. It cost many men their lives, and even left some handicapped for life.

"Yes I have fallen and injured. My left wrist dislocated once. Another time I tumbled up-side down and hit my nape. It was a serious injury. I sought dhivehi beys (traditional medicine) and I got better," said Adambe.

He does his part in reviving the traditional practice among the youngsters of his community. It is not difficult to grasp--though it takes a certain level of fidelity and many years of hands-on experience to become a master at it. Adambe says the four eldest of his twelve children have acquired the skills. Countless other young men of Gemanafushi have also learned toddy tapping from Adambe.

Maldivians had been extracting coconut palm sap for dhoaraa and cooking it into dhiyaa hakuru since the ancient times. Dhoaraa and dhiyaa hakuru still remain priced products in Maldivian hearts. Today, although prices have skyrocketed since old times, demands remain same. Many old tappers have retired from the work and as a result, worriment of losing the ancient way practice exists.

Adambe has lived--and still is living--a rather physical lifestyle. Although at age of retirement, he vows to remain with the raaverikan until his very last day. And to continue passing on to even more interested youngsters, the very dhivehivantha (Maldivian) work he does and and so loves.

Cut off from the world, Indian island remains a mystery