Ameer: Govt. will enforce its decision regarding terminal, even if it requires a Board reshuffle 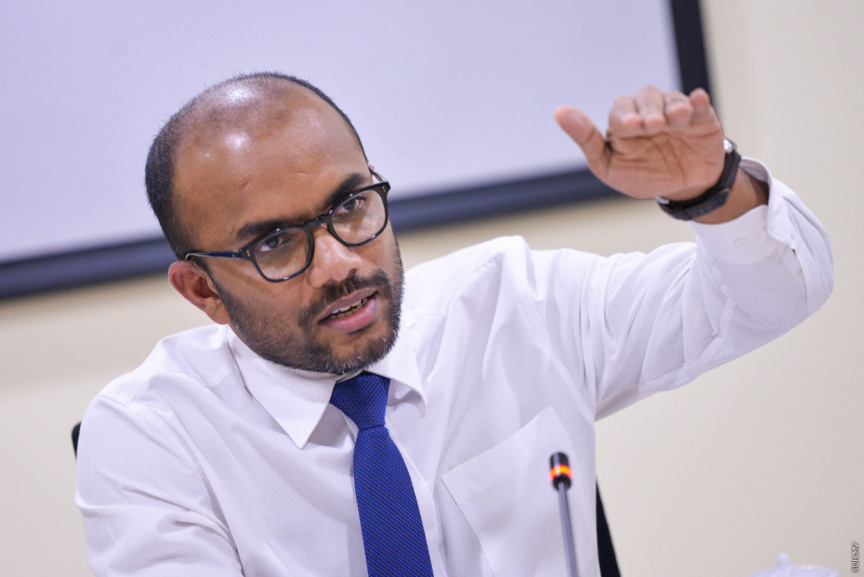 Finance Minister Ibrahim Ameer gestures as he responds to questions during a session of the Parliament's Public Accounts Committee on February 17, 2020. (Sun Photo/Fayaz Moosa)

Finance Minister Ibrahim Ameer, on Monday, said the government was committed to enforcing its decision regarding the new seaplane terminal in Velana International Airport, even if it required a reshuffle of the Board of Maldives Airports Company Limited (MACL).

The new seaplane terminal in VIA is being developed as part of a larger airport development project. The seaplane terminal alone was financed with a USD 40 million loan. Following a dispute regarding the allocation of space from the new terminal, the Finance Ministry, on February 5, intervened with its own recommendations regarding the allocation of space.

MACL was instructed to allocate a 6,300 square meter space from the new terminal to Trans Maldivian Airways (TMA) at the same rate it presently pays for the space in the existing terminal, effective for the next two-year period. MACL was further instructed to allocate other seaplane operators the same size of space they presently use at the existing terminal.

The Parliament’s Public Accounts Committee convened for a session at the request of Minister Ameer on Monday night.

At the session, Ameer said the government’s February 5 decision regarding the seaplane dispute was the fairest for all parties involved.

“I assure you, the present MACL Board will follow through with the government’s recommendations. If they do not, we will still follow through even if it requires reshuffling the Board,” said Ameer, in response to a question by Dhaandhoo MP Abdulla Yauqoob.

Ameer said that the previous Maldivian government had decided on allowing Bain Capital, TMA’s majority shareholder, to manage the new seaplane terminal, and that the decision had been supported by MACL at the time.

He said that it hadn’t been the best of decisions, and that how the decision had been reached warranted a criminal probe.

“I therefore call on a criminal investigation into aforementioned issues. We, the government, want action against those responsible, if there’s evidence this was done in a manner which facilitated corruption,” said Ameer. “The officials [from Bain Capital] claim the then-Economic Minister Mohamed Saeed and senior management of MACL committed to handing over the new terminal to them.”

He said that while TMA and MACL had engaged in negotiations, the negotiations hadn’t produced a contract agreement.

TMA therefore has no basis to pursue arbitration to claim compensation, he said.

'The world has faith in Maldives’ economic policies'

'Prices of goods to further increase this year'

'Enough in reserve for 5 months of essential imports'

Investors would have hesitated if debt was restructured

'Reserves will be back to pre-Covid level by year-end'