Speaker Nasheed clears up allegations of bias over seaplane terminal 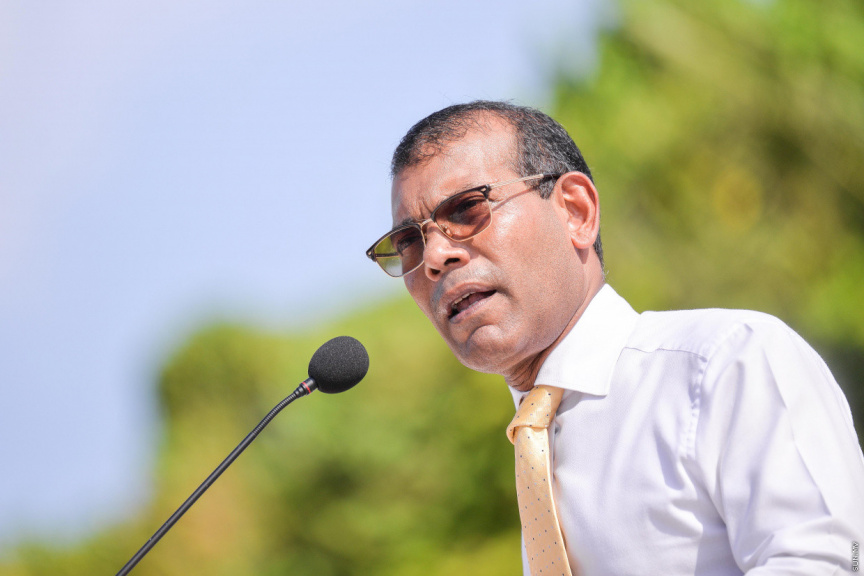 Speaker of the Parliament Mohamed Nasheed speaking at a ceremony on February 3, 2020. (Sun Photo/Fayaz Moosa)

Speaker of the Parliament Mohamed Nasheed has said that the issue of the seaplane terminal was being talked about for the economic loss it may inflict on the state and not because of any party involved.

The Speaker had called for a swift resolution to the matter last Wednesday and said that there fears of the new runway’s opening being delayed and compensation being owed to TMA. The Speaker’s comments were described as a bias towards TMA and MACL by some members of the public.

Speaker Nasheed cleared up this assertment by some on social media with a tweet and even released a note on social media that read that it was his opinion the issue of the seaplane terminal may cause detriment to the economy if not resolved quickly.

“I do not have any connections with MACL and TMA. (My) connection is with the Maldivian citizens and Maldives.” read the handwritten and signed note by the Speaker dated today.

The government has decided to award TMA the same amount of space from the new terminal at the same rate of rent that the company was operating at the old terminal. This decision is being derided by a large number of public and even some MPs who have stated that such a decision would result in losses to MACL.

Yesterday, the Anti-Corruption Commission also announced a criminal investigation into the matter after noting the allegations of unjust advantages to some seaplane operators.

Speaker Nasheed’s statements to resolve the matter quickly followed a similar call by MACL stating that delays in the opening of the new runway could inflict heavy losses on the company.

The ACC investigation had calculated a loss of USD 55 million under the current arrangements the government has with TMA. ACC also noted that some members of the board of Directors of MACL had conflicting interests in TMA as well. The negotiations to award TMA the space in the new terminal with MACL were taken part by these members as well.

The new seaplane is a government-guaranteed project funded by a loan that costs USD 40 million. The project is run by Chinese company BUCG.

'Everything president says will do is not a pledge'

'Dev. of Addu will result in nation-wide progress'