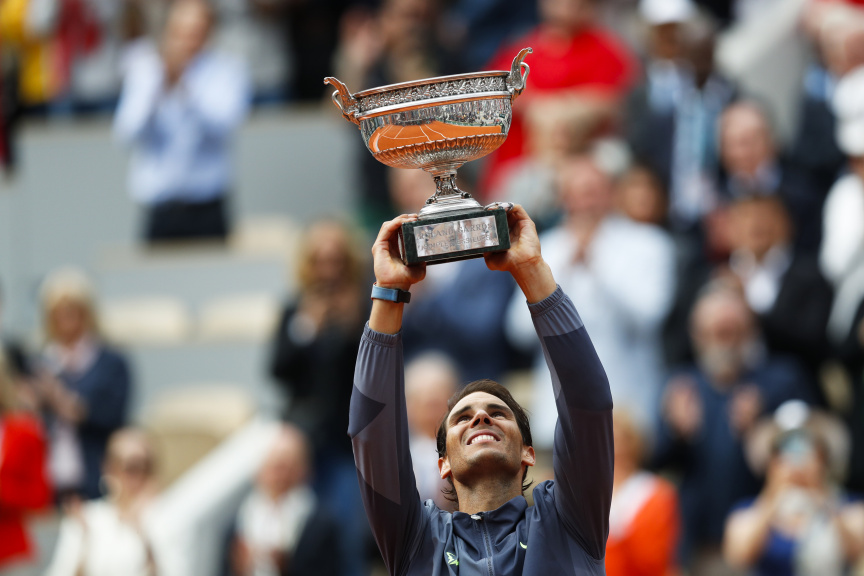 A poor game from Nadal allowed Thiem to break him and even things at a set apiece. That development brought fans to their feet in Court Philippe Chatrier, roaring and clapping and, above all, wondering: Was this, now, a real contest? Could Thiem push Nadal more? Could Thiem make this surge last? Would Nadal falter?

That the questions arose at all was significant. The answers arrived swiftly. Nadal reasserted himself, as he usually does at Roland Garros, by grabbing 16 of the next 17 points and 12 of the remaining 14 games, pulling away to beat Thiem 6-3, 5-7, 6-1, 6-1 for his record-extending 12th championship at the French Open.

No one in tennis ever has won any major tournament that frequently. Then again, no one ever has been as suited for success on any of the sport's surfaces as this 33-year-old Spaniard is on red clay: Nadal is 93-2 for his career at Roland Garros, winning four in a row from 2005-08, five in a row from 2010-14, and now three in a row.

"I can't explain my emotions," said the No. 2-seeded Nadal, who dropped to his back after the final point, getting that rust-colored dirt all over his neon yellow shirt, then wiped away tears during the trophy ceremony.

Looking at the bigger picture, he is now up to 18 Grand Slam trophies, moving within two of Roger Federer's men's record of 20.

Nadal, however, did not want to entertain any discussion of a pursuit of Federer.

"I am not very worried about this stuff," Nadal said. "You can't be frustrated all the time because the neighbor has a bigger house than you or a bigger TV or better garden."

Thiem, a 25-year-old Austrian who was seeded No. 4 and upset No. 1 Novak Djokovic in a draining, rain-interrupted semifinal played over two days, was eyeing his first major title in this rematch of the 2018 final in Paris. But again, he couldn't solve Nadal.

"First thing that I want to say is congrats to Dominic. I feel sorry, because he deserves it here, too," Nadal said. "He has an unbelievable intensity."

So, of course, does Nadal. This had been, by his lofty standards, a rough season, from the most lopsided Grand Slam final loss of his career — against Djokovic at the Australian Open — to entering May without a title for the first year since 2004. Injuries, as often is the case with Nadal, were a problem, including a bad right knee.

"Mentally, I lost a little bit (of) energy, because I had too many issues in a row," Nadal said, tapping his right fingers on his temple.

"When you are constantly hit in the face," he said in Spanish, "you end up being hurt."

He started to right himself by taking the Italian Open title on clay last month.

"It was very important for him to win in Rome. It was like he realized that he was getting back on the good level, on the right path," said Nadal's coach, 1998 French Open champion Carlos Moya, "and gaining a lot of confidence."

Soon enough, Nadal found himself in a familiar position in Paris: playing in the final, and winning it.

This one began on a cloudy afternoon, with the temperature in the low 60s (mid-teens Celsius) and only a slight breeze. In the initial game — interrupted briefly by a baby wailing in the stands, drawing a laugh from other spectators and prompting Nadal to back away from the baseline between serves — three of the five points lasted at least 11 strokes.

And, thereby, a pattern was established: By the end of the 3-hour, 1-minute match, a total of 46 points went 10 strokes or more. Each man claimed half.

From the get-go, it was such a physical grind that Nadal was soaked with sweat and changed neon yellow shirts after just seven games, eliciting catcalls from the stands.

Early on, there were no signs of fatigue for Thiem, even though he was competing for a fourth straight day.

Indeed, it was Thiem who nosed ahead first, closing a 12-stroke exchange by ripping a forehand to earn the first break point, then converting it with an overhead on a 20-stroke exchange for a 3-2 edge. He turned with a clenched right hand to face his guest box, where his girlfriend, women's doubles champion Kristina Mladenovic, was pumping her fist and shouting.

Nadal immediately responded. He grabbed the next four games with elan, using a drop shot to help break for a 5-3 lead, then a serve-and-volley to help hold for the set.

That must have been demoralizing for Thiem. But at the ensuing changeover, he didn't whack a ball toward the stands, as Federer memorably did during his semifinal loss to Nadal. Thiem casually sat in his gray sideline seat, bounced his legs and chewed on an energy bar, furtively glancing at Nadal.

Thiem bounced back, if only briefly. Talk about a stunning shift: Nadal won 25 of 26 points on his serve before — with spectators trading between-point chants of nicknames, "Ra-fa!" and "Do-mi!" — he got broken to cede the second set. That was the only set Thiem managed to steal from Nadal in four career meetings at Roland Garros.

Maybe this was going to be a long one.

But Thiem, put simply, wilted. Enough to create an opening Nadal barged through.

By now, Nadal was creating magic at the net, and he won the point on 23 of 27 times he went forward. One drop volley was spun so marvelously that it landed on Thiem's side, then bounced back toward the net. All Thiem could do was watch — and offer an appreciative thumbs-up.

"Almost everybody will tell you that he's one of the best volleyers of our game," Thiem said. "Because the last time he missed a volley was, maybe, seven years ago, I guess."

Soon enough, it was over. The King of Clay, as Nadal is known, still reigns.

India's Yuvraj Singh retires from all forms of cricket