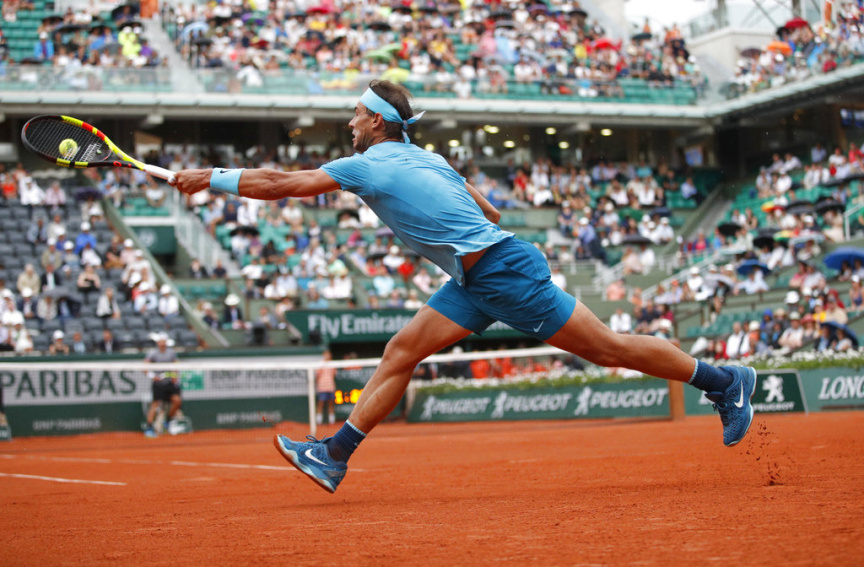 Spain's Rafael Nadal returns a shot against Italy's Simone Bolelli during their first round match of the French Open tennis tournament at the Roland Garros stadium in Paris, France, Monday, May 28, 2018. (AP Photo/Christophe Ena)

PARIS (AP) — Ten-time champion Rafael Nadal fought off a strong challenge by Italian lucky loser Simone Bolelli in the first round of the French Open on Tuesday, yet still advanced in straight sets.

Nadal improved his Paris record to 80-2 with a 6-4, 6-3, 7-6 (9) rain-interrupted win completed over two days on Court Philippe Chatrier after saving four set points in the tiebreaker.

Nadal, once again the overwhelming favorite on his favorite surface after claiming clay titles in Monte Carlo, Barcelona and Rome, trailed 6-3 in the tiebreaker but fended off Bolelli's chances in impressive fashion: the top-ranked Spaniard hit an ace, a backhand volley and a crosscourt winner in succession.

Mixing well deep groundstrokes with subtle shots, Bolelli obtained another set point with a backhand drop shot when to lead 7-6, but Nadal hit a service winner on the next point.

"I went through tough moments, it's important for the future," Nadal said.

This match was one of the six encounters halted on Monday night because of rain. After some more raindrops interrupted play again on Tuesday morning, Nadal came back on court in full swing.

Nadal won the first three games on the day but the 129th-ranked Bolelli raised his level and managed a series of good returns. Nadal saved four break points in the eighth game of the final set, including one with a ferocious trademark cross-court forehand winner.

"It was a very difficult match, Simone played very aggressively, he had many chances in the third set," Nadal said.

Among others advancing were No. 6 seed Kevin Anderson and No. 9 John Isner.

In women's play, two-time Grand Slam winner Garbine Muguruza got back to winning ways in Paris by beating Russia's Svetlana Kuznetsova, another former Roland Garros champion. Muguruza, who claimed the title in Paris two years ago, advanced with a 7-6 (0), 6-2 win.

After beating Serena Williams in the 2016 final, Muguruza's title defense was ended in the fourth round last year.

Now ranked 43rd, the 32-year-old Kuznetsova was making her 16th consecutive appearance in the main draw in Paris, where she won the title in 2009.

Williams was later making her comeback to Grand Slam tennis following the birth of her daughter in September. She hasn't played in a major since winning her 23rd Grand Slam title at the 2017 Australian Open and a big question mark is hanging over her current form.

A three-time champion at Roland Garros, Williams had not played a single competitive match on clay this season ahead of her first round meeting with Kristyna Pliskova of the Czech Republic

Salah won't be out longer than 3 weeks, Egypt's FA says