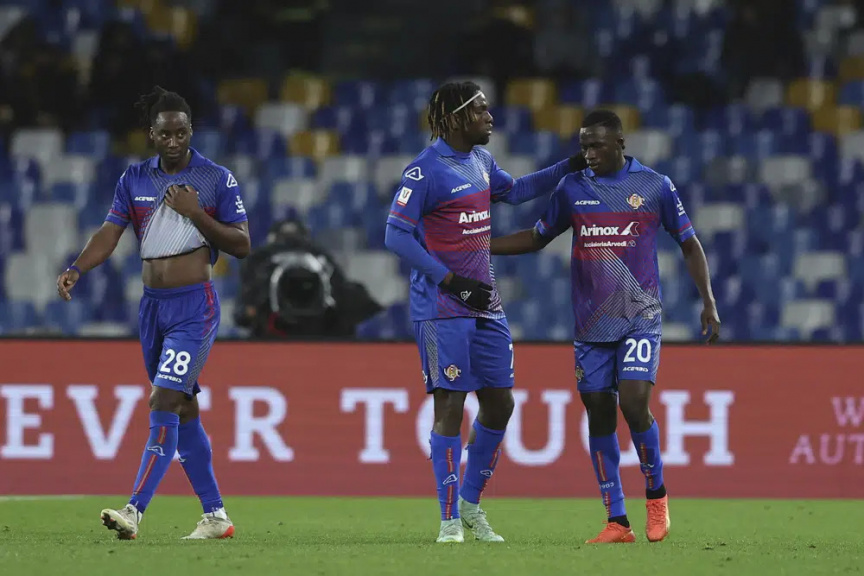 Cremonese's Felix Afena-Gyan, right, celebrates with teammates after scoring his team's second goal, during the Italian Cup round of 16 soccer match between Napoli and Cremonese at the Diego Armando Maradona stadium in Naples, Italy, Tuesday, Jan. 17, 2023. (Alessandro Garofalo/LaPresse via AP)

NAPLES, Italy (AP) — Just two days after being appointed as coach, Davide Ballardini steered his side to a huge upset as 10-man Cremonese eliminated Napoli from the Italian Cup on Tuesday.

Cremonese won a penalty shootout after playing most of extra time with 10 men after the match finished 2-2. It will face Roma in the next round.

Napoli midfielder Stanislav Lobotka was the only player to miss a penalty as he sent his spot kick wide in the pouring rain at the Stadio Diego Armando Maradona.

It was Ballardini’s first match in charge of Cremonese after being hired on Sunday to replace Massimiliano Alvini, who was fired after 11 losses in 18 league matches.

Cremonese is in last place in Serie A and faced the runaway league leader, which had beaten Juventus 5-1 on Friday.

But it was the visitors which took a surprise lead in the 18th minute when David Okereke raced down the left flank before cutting inside and rolling across for Charles Pickel to slot home.

However, Napoli turned it around with two goals in three minutes.

Cremonese goalkeeper Marco Carnesecchi parried a rocket from Tanguy Ndombele but then went to ground as he attempted to deny Giovanni Simeone, who headed off the crossbar, and Juan Jesus turned in the rebound.

There were fierce protests from Cremonese but, after checking with the video assistant referee, the goal was awarded by referee Maria Sole Ferrieri Caputi, who was leading an all-female officiating crew for the first time in a match involving two Serie A teams.

Simeone headed Napoli ahead shortly after and it seemed as if the home side was set to ease to victory before a header from Felix Afena-Gyan with three minutes remaining saw Cremonese force extra time.

Cremonese’s chances of getting anything from the match appeared to diminish when defender Leonardo Sernicola was sent off 10 minutes into extra time following a second yellow card but it held on and emerged victorious from the shootout with Afena-Gyan converting the final penalty.