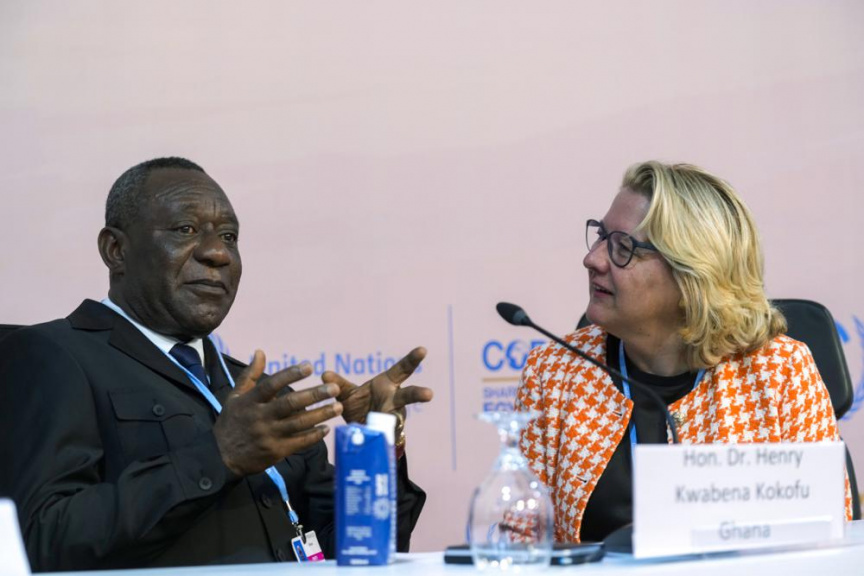 The so-called Global Shield is backed by the V20, an alliance of climate vulnerable nations chaired by Ghana, and the G-7 chaired by Germany. The scheme is designed to kick in with aid in the event of climate-related disasters in vulnerable nations. But critics argue it doesn’t cover slower climate change effects, such as rising seas or the slow loss of arable land, nor does it account for historical harms.

Under the newly launched shield, countries will receive more than $200 million dollars in funding, mostly from Germany. Initial recipients include Bangladesh, Costa Rica, Fiji, Ghana, Pakistan, the Philippines, and Senegal. In the last 20 years, nations in the V20 group are estimated to have lost $525 billion to their GDP because of climate change-related events, according to a report released by the group.

Ghana’s finance minister and V20 chair Ken Ofori-Atta called it “a path-breaking effort” that would help protect communities when lives and livelihoods are lost.

Civil society groups and aid agencies also warned the insurance scheme should not be used to distract from the much broader effort to get big polluters to pay for the loss and damage they’ve caused with their greenhouse gases. Vulnerable countries have long been calling for compensation for climate-related harms, with estimates of financial damage far exceeding the sums available in through the Global Shield.

“We need a solution at the scale of the losses, and that means going beyond subsidized insurance,” said Rachel Simon of the environmental group Climate Action Network Europe.

She said new funds should also be created within the oversight of the U.N. climate talks, not on the sidelines, to ensure proper international supervision. Simon added that the loss and damage financing needs to be in the form of grants as opposed to debt which leads poor and developing nations to debt-distress.

Speaking for the G-7, Germany’s development minister Svenja Schulze said the shield is not a ruse to avoid more comprehensive funding for vulnerable nations, which remains a key issue at the ongoing negotiations.

“Those most affected need action now,” Schulze said. “It is not a kind of tactic to avoid a loss and damage financing facility at the negotiation.”

Negotiators released the first draft of a crucial agreement on the issue of loss and damage on Monday.

The draft contained two options that reflect the divide between rich and poor nations. Vulnerable countries are proposing that such a fund should be “operationalized no later” than November 2024, whereas richer nations say funding should come from a wide range of initiatives.