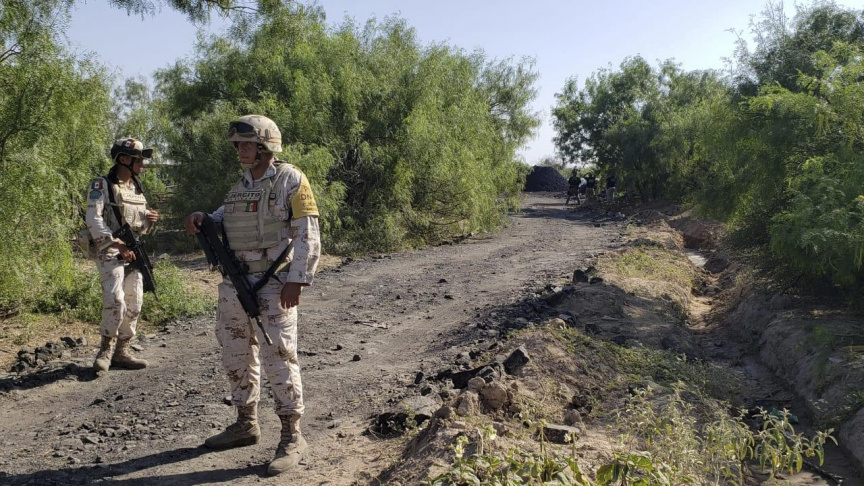 National Guards stand along the road that leads to where miners are trapped in a collapsed and flooded coal mine in Sabinas in Mexico's Coahuila state, Thursday, Aug. 4, 2022. (AP Photo/Elizabeth Monroy)

SABINAS, Mexico (AP) — Efforts to rescue 10 miners trapped in a collapsed and flooded coal mine in northern Mexico intensified Thursday with hundreds of people involved in the operation, authorities said.

The collapse occurred after the miners breached a neighboring area filled with water on Wednesday, officials said. Authorities had not reported any contact with the trapped miners since the collapse.

The miners are trapped between two 200-foot deep mine shafts more than half flooded with water, Undersecretary of Defense Agustín Rádiala Suástegui said Thursday. Rescuers were working to pump water out of the flooded mine.

A National Guard plane was expected to arrive Thursday with six special forces scuba divers who could enter the mine when conditions allow.

Civil Defense Coordinator Laura Velázquez said that five miners had managed to escape the collapse. Three of them remained hospitalized. Authorities had initially reported nine trapped miners Wednesday, but revised that number to 10 on Thursday.

The mine is in Sabinas, about 70 miles southwest of Eagle Pass, Texas. The mine began operations this year, and the local government said it had not received any complaints or reports of previous incidents.

More than 24 hours after the collapse, relatives of the trapped miners waited in the shade of a tree outside the mine. Police and soldiers with rifles restricted access to the mine.

Alfredo Torres, cousin of one of the trapped miners, said he had been volunteering in the rescue effort since Wednesday. Wearing a plastic helmet and clothes and boots coated in mud, he said they had been using small pumps since the day before to remove water from the flooded shafts, but the water remained high.

“No one can go in,” Torres said. “We have to first try to pump out all of the water, get it out, so the miners can go in to rescue their co-workers. He said that so far there had been no contact with the trapped miners.

He said he still hoped to find them alive, but recognized that “many hours have passed and the water is still very high.”

A small chapel was set up outside the mine where family members could pray for the miners’ rescue.

Bishop Alonso Garza from the Piedras Negras diocese complained that conditions for miners continued to be bad and called on the government and companies to improve safety. “Each time that a tragedy like this happens they say yes and unfortunately now no.”

In June and July of 2021, cave-ins at two Coahuila mines claimed the lives of nine miners.

Mexico’s worst mining accident also occurred in Coahuila on Feb. 19, 2006, when an explosion ripped through the Pasta de Conchos mine while 73 miners were inside. Eight were rescued with injuries including serious burns. The rest died and only two of their bodies were recovered.

López Obrador’s administration promised two years ago to recover the remaining 63 bodies, a highly technical endeavor that has still not begun.

The Pasta de Conchos Family Organization made up of relatives of those lost in that tragedy said in a statement late Wednesday that the new mining accident shows that the structural dangers that led to the Pasta de Conchos collapse have not been addressed. There is a lack of inspections, complicity with mining companies and little protection for workers.

They called on the government to do everything possible to rescue the miners and review mining conditions in the area.

Mexico pres to bypass congress to keep army in streets

2 journalists killed in Mexico; 10th and 11th of year