Operations resume at Kudahuvadhoo airport after halt of protests 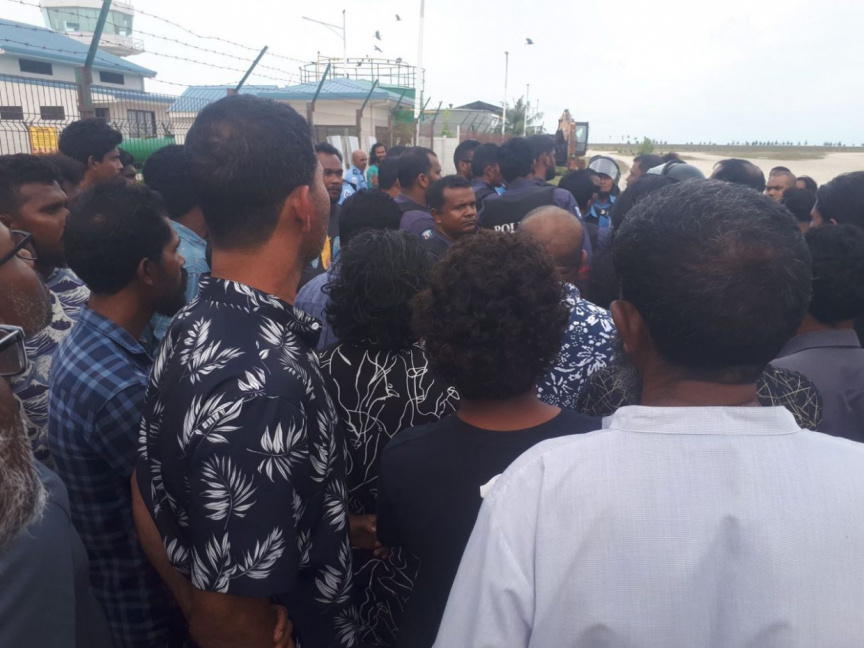 A screenshot from a video that showed the clashes between people and Police in Kudahuvadhoo over delays in transportation of sick patient to Male' City.

Operations of Dhaalu Airport situated in Dh. Kudahuvadhoo has resumed on Wednesday after the halt of protests by residents of the island over delays in the transportation of a youth to Male’ City for further medical treatment after suffering a heart attack.

An official from Kudahuvadhoo Council who spoke to Sun confirmed that flights have resumed operations to the island’s airport. The official further detailed that some residents were still present at the airport premise despite the halt of the protests.

Kudahuvadhoo Council has stated that despite the existence of an airport on the island, it cannot be used during times of need or emergencies – which is a longstanding issue that has yet to be addressed.

Speaking to Sun regarding the matter – a member of Kudahuvadhoo Council, Abdulla Jameel said that the issue did not come to light neither yesterday nor today. He stressed that there had been no way to transport patients to Male’ City during emergencies since the inauguration of the airport until present.

“There is a huge airport here. It is in operation. Despite Manta Airline flights being scheduled – there is no other means to transport patients during emergencies to Male’ City. The residents have been talking about this since the start. Have complained as well. Approximately six years have passed since this is being talked about. Since the residents have had these concerns,” he had said.

During the protest held at Kudahuvadhoo yesterday – residents clashed with police following which one participant was arrested.

A resident from Kudhuvadhoo who spoke to Sun detailed that a protester was arrested during clashes with the police sometime yesterday morning.

The resident further detailed that they halted the protest as Manta Air’s senior management had promised to hold discussions with Kudahuvadhoo residents at the island at 4:00pm this evening.

Operator of Dhaalu Airport, Manta Air held a press conference yesterday regarding the clashes at Kudahuvadhoo. In this regard, Manta Air’s CEO Mohamed Khaleel said that ATR aircrafts currently used by the airline is not designed to accommodate stretchers.

Nevertheless, after being informed of the inability to transport a sick patient to Male’ City from Kudahuvadhoo, he said that the airline had kept a seaplane on standby. He added that the seaplane was unable to undertake the trip as it was during the night.

Speaking further, Khaleel said that no individual has requested the airline to transport a sick patient under the stipulated regulations so far.

President Solih arrives at Mumbai in trip to India