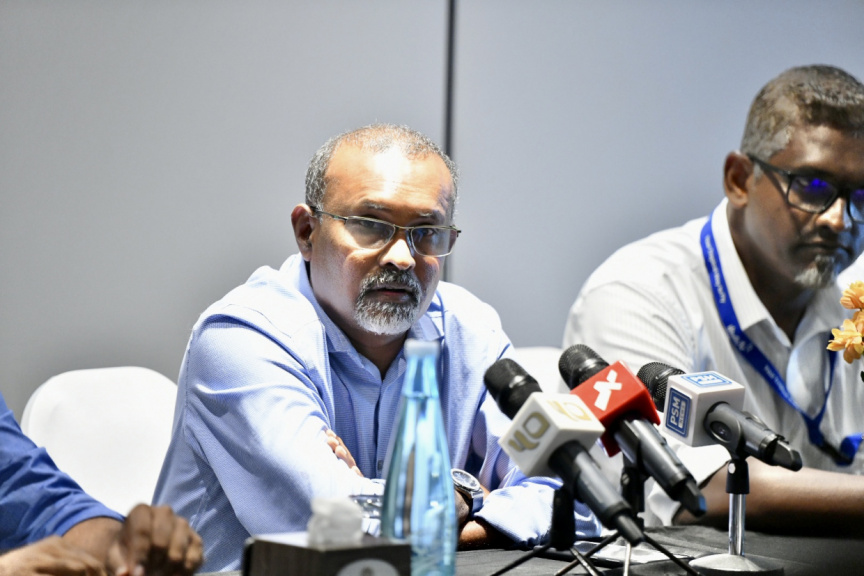 Manta Air’s CEO Mohamed Khaleel, on Tuesday, has stated that protests at Dhaalu Airport in Dh. Kudahuvadhoo starting yesterday has given a wrong message – adding it may possibly impact tourism in the future.

At a press conference held earlier today, Khaleel said that last night’s protest had resulted in 12 tourists being stick at the airport, which included four children.

He added that the stranded tourists were only able to leave the airport at 7:00am this morning, through Manta Air’s seaplane.

Khaleel said that such protests may impact the prospects of tourism in the Maldives – which can ultimately lead to major losses.

“One of the biggest hotel chains in the world – Riu Hotel’s chief called me multiple times today to inquire whether their clients were safe,” he added.

Khaleel also underscored that ATR aircrafts currently used by Manta is not designed to accommodate stretchers. Nevertheless, after being informed of the inability to transport a sick patient to Male’ City from Kudahuvadhoo, the airline had kept a seaplane on standby. He said the seaplane was unable to undertake the trip as it was during the night.

Speaking further, Khaleel said that no individual has requested the airline to transport a sick patient under the stipulated regulations so far.

He added that in similar previous circumstances – the protocol followed was to transport the sick patient via seaplane or through a Maldivian’s medical evacuation flight.

Khaleel also noted that the airline had initiated efforts to find an alternate solution over the airline’s aircrafts inability to accommodate stretchers. In this regard, he said that a permit to install wheels on a seaplane and use it as a medical evacuation flight was requested in March 2020.

“Will be much cheaper than the cost of acquiring a larger aircraft to install wheels on a seaplane and carrying out medevac flights instead,” he had said.

He stressed that Manta Air has always been cooperative in circumstances involving the transportation of sick patients.

Yesterday’s protest at Kudahuvadhoo was sparked by the delays in the transportation of a youth who has suffered a heart attack to Male’ City for further treatment. Residents of the island had barricaded the airport, so that it cannot be accessed. Therewith, operations of the airport came to a hold.

During the protests which continued onto today – the residents clashed with the police. One arrest was also made during the clashes.

The sick youth was transported to Male’ City via a Maldivian flight this morning. Maldivian airline said that the flight left Kudahuvadhoo at 6:45am this morning.

Manta’s CEO Khaleel said that efforts were underway to recommence operations at the airport as soon as possible.