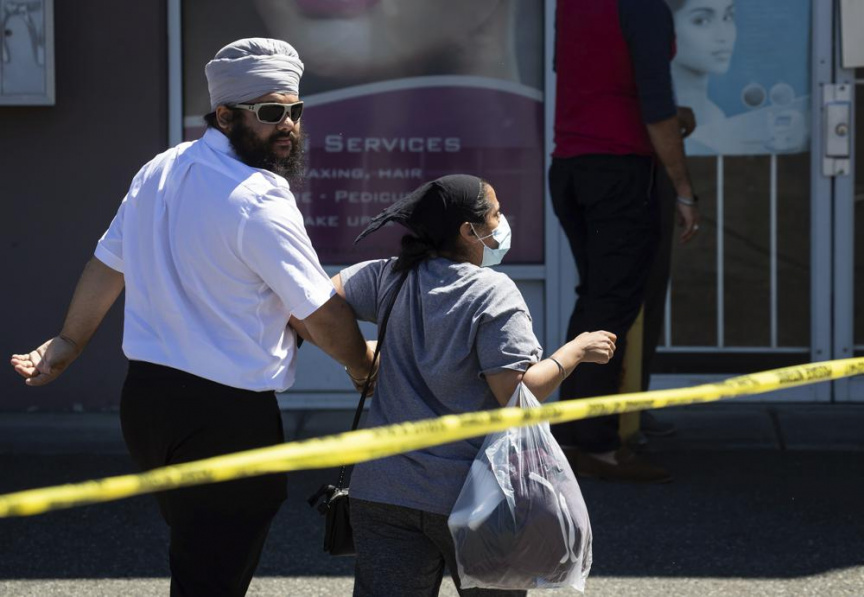 Family members of a victim arrive at the scene as police investigate a fatal shooting in Surrey, British Columbia, Canada, on Thursday, July 14, 2022. (Darryl Dyck/The Canadian Press via AP)

SURREY, British Columbia (AP) — Two men have been charged with first-degree murder in the killing of Ripudaman Singh Malik, a man acquitted in 2005 for the bombings of two Air India jets that killed 331 people.

Malik, 75, was shot while sitting inside his car outside his Surrey business July 14.

Police said Wednesday that Tanner Fox, 21, and Jose Lopez, 23, had been charged.

A vehicle with people inside had waited for hours that morning before Malik showed up and he was shot at about 9:30 a.m., police said. The same vehicle, a white Honda CRV, was found burned not far from the scene of the shooting.

An employee who works at a nearby car wash said he heard shots and ran outside to find Malik unconscious in his red Tesla.

At an afternoon news conference, police said only that the investigation was continuing when asked about a possible motive or if there was any relationship between the alleged killers and the victim.

A similar response was given when reporters asked if anyone else was involved or if other suspects were at large.

“We’re going to follow the evidence, and wherever that evidence leads us is where we’ll go next,″ said Supt. Mandeep Mooker of the Integrated Homicide Investigation Team.

Malik and his co-accused, Ajaib Singh Bagri, were found not guilty of murder and conspiracy in the Air India bombings on June 23, 1985.

During Malik’s trial, British Columbia Supreme Court heard that a suitcase bomb was loaded onto a plane at Vancouver’s airport and then transferred in Toronto to Air India Flight 182. The aircraft crashed into the Atlantic Ocean off the coast of Ireland, killing 329 passengers and crew.

About an hour later, a bomb destined for another Air India plane exploded prematurely at Tokyo’s Narita Airport, where two baggage handlers died.

Inderjit Singh Reyat, the only man convicted in the bombings, testified for the prosecution at Malik and Bagri’s trial and was later convicted of perjury.