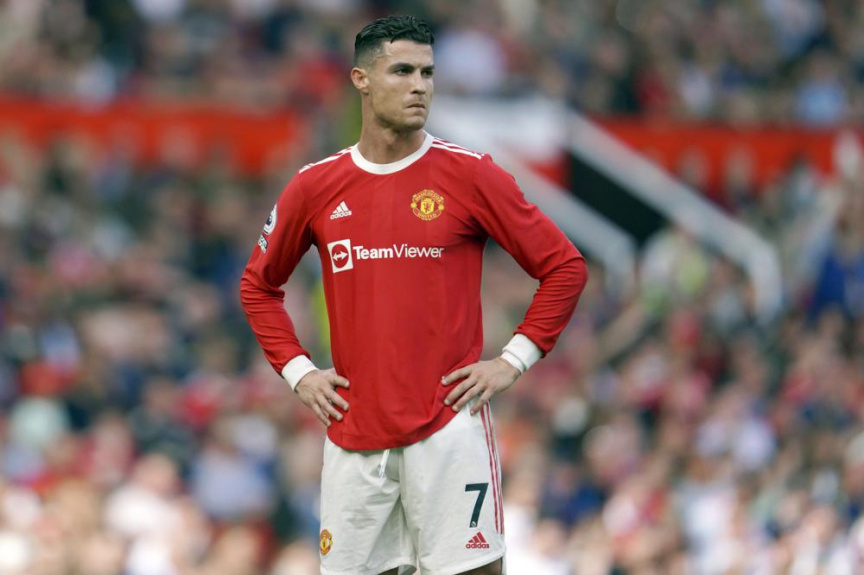 The weekly social media posts published by Cristiano Ronaldo this offseason typically have shown the soccer superstar half-dressed, muscles bulging, either working out or promoting one of his many brands.

Remaining relevant and highly visible is clearly so important to the player who, along with Lionel Messi, is the greatest of his generation. That also extends to the final years of his career on the field, too.

It’s why, for the 37-year-old Ronaldo, playing for Manchester United — still one of the world’s most famous sports teams, despite their recent trophy drought — just isn’t enough. He wants to be competing on the biggest stage, winning the biggest trophies while he can.

Hence the current standoff with United, which is becoming more damaging and disruptive as the days go by and the new season looms.

Publicly, Ronaldo has not yet returned to preseason training with the English club because of what has been described as “personal reasons.” The expectation, recently hired United manager Erik ten Hag repeats on an almost-daily basis, is that Ronaldo will be back before the Premier League begins and be a key member of the squad.

The reality, it seems, is different. Ronaldo reportedly wants out after just one season back at Old Trafford, with United no longer in the Champions League or in shape to compete with the best teams in England like Manchester City and Liverpool. United finished sixth last season, 35 points behind first-place City.

So, while the rest of the United squad has been on tour in Thailand and Australia, getting match-sharp and acquainted with ten Hag and his methods, Ronaldo has been back home in Portugal with his family while his agent, Jorge Mendes, shops around seeking a new club for his most famous client.

Currently, there is no buyer.

And the Premier League season starts in about two weeks.

“I don’t know what Cristiano said to the club and to the manager,” said United midfielder Bruno Fernandes, who also plays alongside Ronaldo for Portugal. “I don’t know what’s going on in his head, if he wants to leave. I didn’t ask them that.

“From everything we know,” Fernandes added, “he had some family problems so we have to respect his space, give him some space and that’s it. The only thing I asked Cristiano when he didn’t turn up was if everything was OK with the family. He told me what was going on, that’s it and nothing more.”

On the face of it, United still wants to keep Ronaldo — he was the team’s top scorer last season with 24 goals and is back to being the club’s poster boy for the marketing department — and ten Hag has called the striker “extremely important” along with being “not for sale.”

But why would other top clubs be cold on a player who is still a guaranteed source of goals, and revenue for that matter?

Goals might be the aim of the game but they are not necessarily enough for a modern-day coach. A certain level of mobility and an ability to be part of a team pressing game counts for a lot, too, and Ronaldo does not offer that, even if he remains a supremely athletic player with that uncanny knack of coming alive in the penalty area and scoring from anywhere. A team’s structure must change to accommodate a player like an aging Ronaldo, covering for his deficiencies and the need to make him the focal point.

In short, his presence requires compromises to be made. He is a problem and a solution.

Maybe, if he ends up staying at United, ten Hag can come up with a system in which Ronaldo thrives and the players around him can cover for him and make the team operate in an efficient way. That’s easier said than done.

Thomas Tuchel — the sort of coach who values a team over the individual — clearly thought that wasn’t possible, given his Chelsea team was one of the clubs Mendes apparently spoke to. There was a glaring hole in Chelsea’s forward line, too, with Romelu Lukaku returning to Inter Milan.

Bayern Munich is another team to have reportedly turned down the chance to sign Ronaldo. There has been no desire from Real Madrid or Juventus to go back in for him, either.

Ronaldo’s wage demands are likely ruling out most of the other clubs competing in this season’s Champions League, a competition in which he is the record scorer with 141 goals — 16 more than Messi — and for which he lives.

It leaves Ronaldo in an awkward spot. Still one of the greatest scorers in soccer but a player unwanted by the best teams.

So what comes next? An uneasy truce with United and a sheepish return to a team playing in the Europa League and unlikely to be involved in the Premier League title race? Or can Mendes pull a blockbuster move out of the bag, like he did last year when Ronaldo sealed a sensational return to England?

For his brand and his legacy, Ronaldo will want the latter, ending what has turned out to be a nostalgia project without a happy ending.

And deep down, that might suit ten Hag, too, enabling him to start the rebuilding job at United with a clean slate.

Ronaldo says his dream of winning World Cup has ‘ended’

Ronaldo to leave Man U ‘with immediate effect'

Ronaldo cites ‘heat of moment’ after left off squad

Ronaldo says he is not planning to retire after WCup