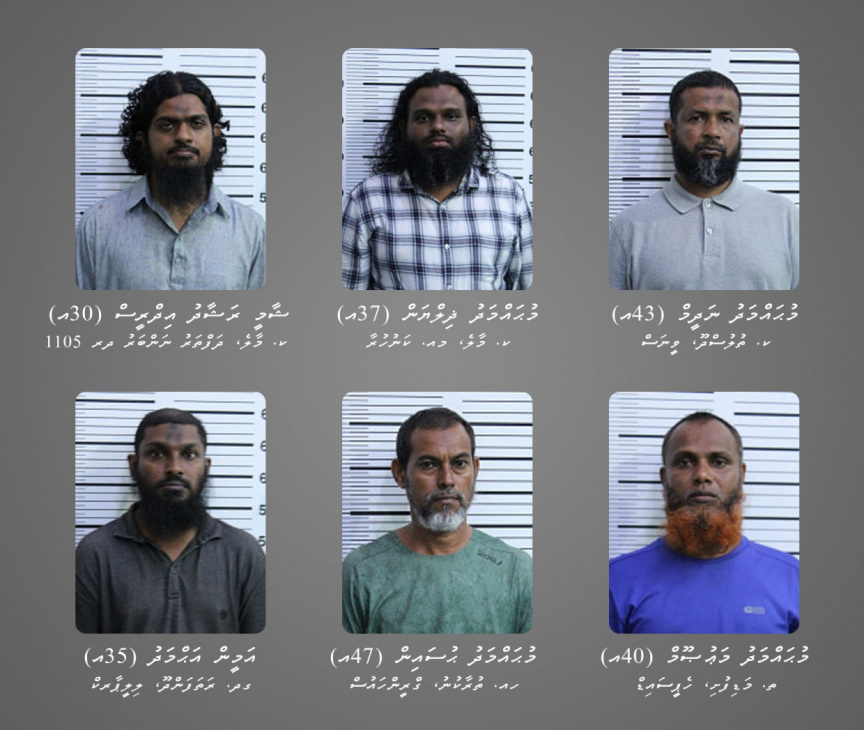 Combined photos of six arrested in connection to the storming of Galolhu National Stadium, obstructing activities underway at the stadium to mark the International Day of Yoga. (Photo/Maldives Police Service)

The six suspects that were arrested in connection to the  storming of Galolhu National Stadium on Tuesday morning by a group of people, obstructing activities underway at the stadium to mark the International Day of Yoga, has been remanded in police custody.

Apart from this, their identities have been disclosed. The six suspects are:

The ‘Yoga Day’ event was hosted by Youth Ministry in collaboration with Indian Cultural Centre.

Ambassador of India to the Maldives Munu Mahawar, diplomats and senior officials from the Maldivian government alongside members of the general public were doing yoga at Galolhu National Stadium when the premise was stormed.

The group which stormed the stadium were carrying flags containing verses from the Shahada. They threatened, attacked the participants and vandalized the property.

When the group first stormed the stadium – only a few police officers were maintaining security on the premise. They had used pepper spray to subdue the rioters.

Expressing concern over the incident – Youth Minister Ahmed Mahloof said that the event was obstructed for political reasons, in the name religion.

In this regard, Minister Mahloof said that ‘Yoga Day’ has been celebrated in the Maldives since 2014 – with major public events being held to mark the day during Yameen’s administration as well. He added that there is no reason for something that was not ‘haram’ back then to become ‘haram’ now. He also stressed that yoga was not a religious activity.

He also alleged the storming of the event was backed by senior officials from Progressive Party of Maldives (PPM) and Jamiyyath Salaf were behind the violence which ensued. However, both deny the allegations against them.

Minister Mahloof described Tuesday’s events as a lowly act which unfolded in front of senior officials from foreign countries.