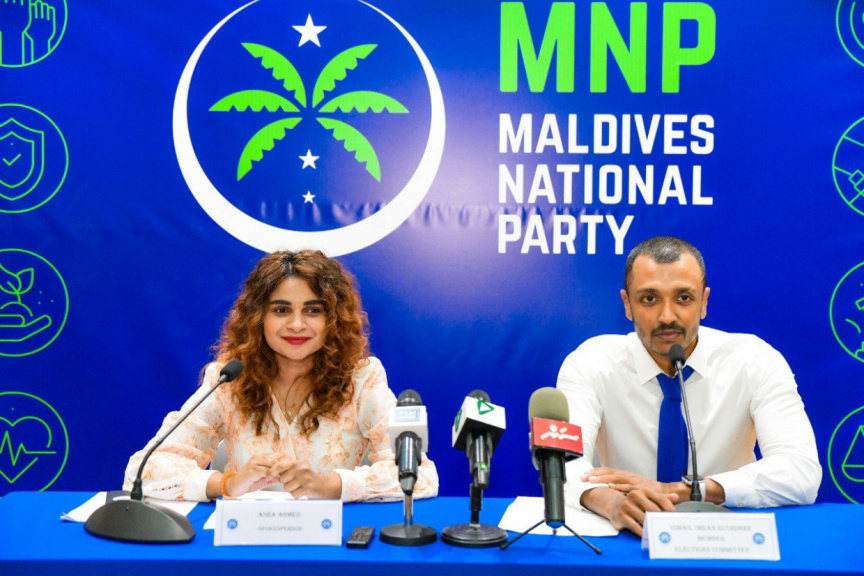 The spokesperson of MNP Asra sharing information with the press.

Maldives National Party (MNP) on Saturday announced that the party will be holding its internal elections on August 6, 2022.

The party made the announcement during a press conference.

Speaking at the gathering, the spokesperson of the party Asra Ahmed said that currently the positions held in the party were temporary. Hence, she stated that the elections have been scheduled.

“The date for the party’s internal elections has been decided. Yesterday application for the posts also opened. [I] remind all to submit applications ahead of the deadline.”

Additionally, Asra revealed that those who newly sign in for the party before the deadline would also be eligible to apply for posts.

“That is to provide a greater opportunity. MNP came for a better change, to develop empowered people. So we want to provide these opportunities as much as possible.”

In this election, a party president, as well as five vice presidents for five areas of Maldives, will be elected. The leader and deputy leader for the party’s Women’s Wing will also be elected.

The deadline to apply for the posts is 02:00 pm on June 27. The names of the candidates will be announced on July 7.

Moreover, MNP stated that from July 7 onwards a period of one month will be given for campaign purposes.

The application form and other information will be available from the party’s website.