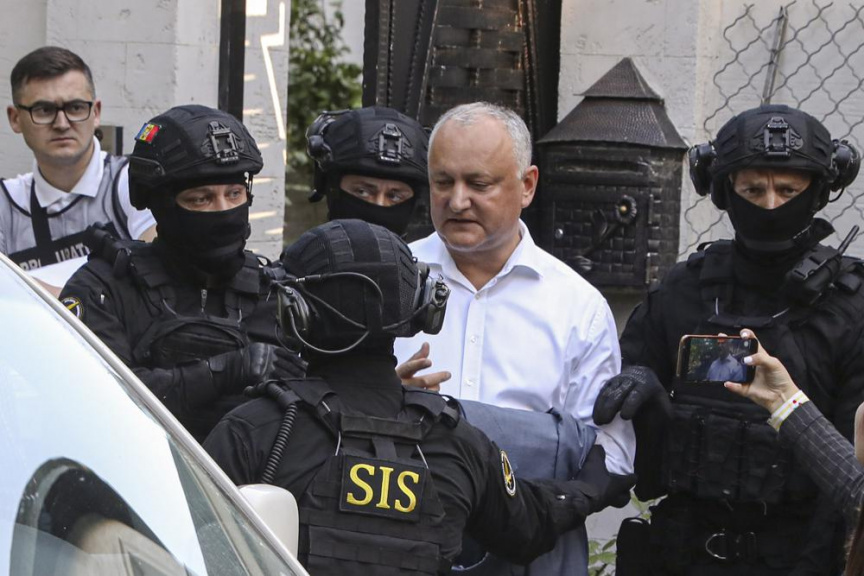 Members of Moldova's Information and Security service (SIS) escort former Moldovan President Igor Dodon to a van after he was detained at his house in Chisinau, Moldova, Tuesday, May 24, 2022. Moldovan media reported that police were conducting a search of a house described as belonging to Dodon, who served as president from 2016 to 2020. (AP Photo/Aurel Obreja)

Photographs showed members of Moldova’s Information and Security Service escorting former president Igor Dodon to a van after he was detained at his house in the capital, Chisinau. Dodon leads the Eastern European country’s pro-Russian main opposition bloc.

Senior anti-corruption prosecutor Elena Cazacov did not identify the detainee. She told a press conference that he and a second person were ordered held in custody for 72 hours after authorities deemed that otherwise there was a “risk of destruction of evidence.”

Moldovan website Protv.md broadcast a live feed of several police officers standing guard at the gate of a house described as belonging to Dodon, who was president from 2016 to 2020.

“The subjects of the investigation are mainly one of the former Presidents of the Republic of Moldova and those close to him, but also other persons who have a connection to the commission of the alleged acts,” she said.

During the police search, numerous supporters of Dodon, as well as other protesters, congregated on the street. Dozens of Dodon supporters also gathered outside Moldova’s parliament in the capital Chisinau demanding the government’s resignation. The former president’s party controls 22 of the parliament’s 101 seats and is the main opposition force, acting in a coalition with Moldova’s communist party.

Cazacov said a total of ten locations were searched, and sums of money in Moldovan lei and foreign currency were seized.

“During the searches, one of the persons tried to destroy, by swallowing, documents ... which confirmed real estate transactions worth about 700,000 euros,” she said.

“The searches revealed that only at the beginning of 2022 the persons under investigation benefited from leisure services, contracted through tourism companies in the Russian Federation, worth about 4 million rubles ($70,000),” the prosecutor added.

Kremlin spokesman Dmitry Peskov said Tuesday that Moscow was “alarmed” at the “persecution” of Dodon, but noted that it was an internal affair of Moldova’s.

“We are, of course, alarmed that again such a practice and persecution is being used against those who are supporters of the development of friendly and mutually beneficial relations with the Russian Federation,” Peskov told reporters during a conference call.

One of Europe’s poorest countries, Moldova is an ex-Soviet republic that gained independence in 1991.

Husband dies after wife is slain in Texas rampage