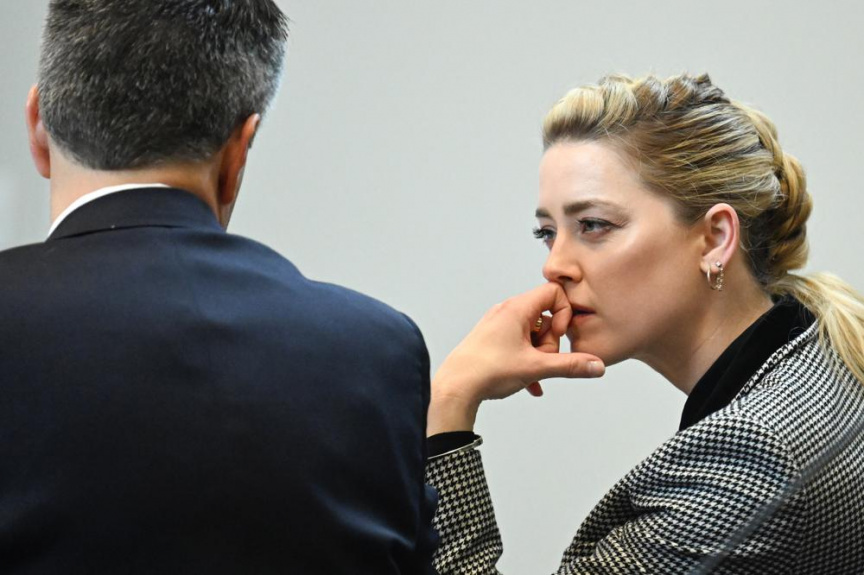 Actor Amber Heard speaks with a legal team member at the Fairfax County Circuit Courthouse in Fairfax, Va., Tuesday, May 24, 2022. Depp sued his ex-wife Amber Heard for libel in Fairfax County Circuit Court after she wrote an op-ed piece in The Washington Post in 2018 referring to herself as a "public figure representing domestic abuse." (Jim Watson/Pool photo via AP)

FALLS CHURCH, Va. (AP) — Jurors in Jonny Depp's libel lawsuit against ex-wife Amber Heard heard a snippet of testimony Tuesday contradicting one of Heard’s key witnesses, but much of the context was stripped away.

Depp is suing Heard for libel in Fairfax County Circuit Court over a December 2018 op-ed she wrote in The Washington Post describing herself as “a public figure representing domestic abuse.” His lawyers say he was defamed by the article even though it never mentioned his name.

Depp has denied he ever struck Heard and says she was the abuser in the relationship. Heard has testified about more than a dozen separate instances of physical abuse she says she suffered at Depp’s hands.

Howell testified that she sent an email in 2020 to Henriquez begging her to tell the truth.

Jurors, though, did not see the letter, nor did Howell explain in what way she thought Henriquez was being untruthful. The edited deposition played in court for less than 15 minutes — Howell appeared to walk out of the deposition before lawyers had completed their questioning.

In a court document, though, Howell goes into much greater detail. She gives a four-page declaration in which she says Henriquez confided in her that Heard was the aggressor in the fight and Henriquez allegedly said she thought Heard “was going to kill Johnny.”

Howell also says in the declaration that Henriquez told her and others in their workplace that Heard cut off Depp’s finger in a fight the couple had in Australia. The severed finger has been a point of dispute throughout the trial. Depp says the finger was severed when Heard lobbed a vodka bottle at him. Heard says Depp did it to himself on a night when he was in a drunken rage and sexually assaulted her with a bourbon bottle.

Henriquez is the only one of Heard’s witnesses who testified in the six-week trial that she personally witnessed Depp physically assault Heard, in a fight where she said each landed blows on the other while she was caught between the two.

It’s not entirely clear why Howell’s testimony was so limited. Throughout the trial, though, Judge Penney Azcarate has strictly enforced rules limiting hearsay evidence, and Howell’s description of what Henriquez told her would likely be a classic example of hearsay unless Depp’s lawyers could claim some sort of exception to the hearsay rule.

In Howell’s declaration, she acknowledged that she was upset when she learned that Heard had pledged millions of dollars to the American Civil Liberties Union and a children’s hospital, when Howell thought the money could do more good at The Art of Elysium, the nonprofit she ran and that had employed Henriquez.

The limited nature of Howell’s testimony makes it unclear if jurors will draw the connections that Depp’s team hopes to make.

Howell testified as a rebuttal witness for Depp after Heard rested her case Tuesday morning without calling Depp to the stand — Heard’s lawyers had initially suggested they would call Depp as a witness.

Jurors may still hear more from Depp. His team has indicated they may call him to the stand Wednesday.

Both Depp and Heard have each testified extensively already about details of their toxic relationship.

TMZ said it’s concerned that Tremaine is prepared to testify Wednesday for Depp and violate a pledge of confidentiality that the news outlet provided to a source who gave TMZ information related to the couple’s high-profile divorce.

Heard has denied that she tipped off news outlets about the fact that she obtained a temporary restraining order after filing for divorce from Depp in 2016. Heard alleged Depp abused her in that application, and Heard was photographed by paparazzi leaving the courthouse with an apparent bruise on her cheek.

Depp’s lawyers have said she sought publicity about her abuse allegations to falsely damage his reputation.

Also Tuesday, Judge Penney Azcarate rejected a motion from Depp’s attorneys to toss out a $100 million counterclaim she filed against Depp. The counterclaim alleges Depp’s then-lawyer, Adam Waldman, defamed Heard when he called her abuse allegations a hoax.

Azcarate said the bar for tossing out a claim before it goes to the jury is exceedingly high and said there is enough evidence to allow it to go forward. She had already ruled Depp could be held responsible for statements made by his lawyer, a principle Depp’s team disputes.

Heard says she stands by ‘every word’ of her testimony

Amber Heard testifies she was assaulted by Johnny Depp