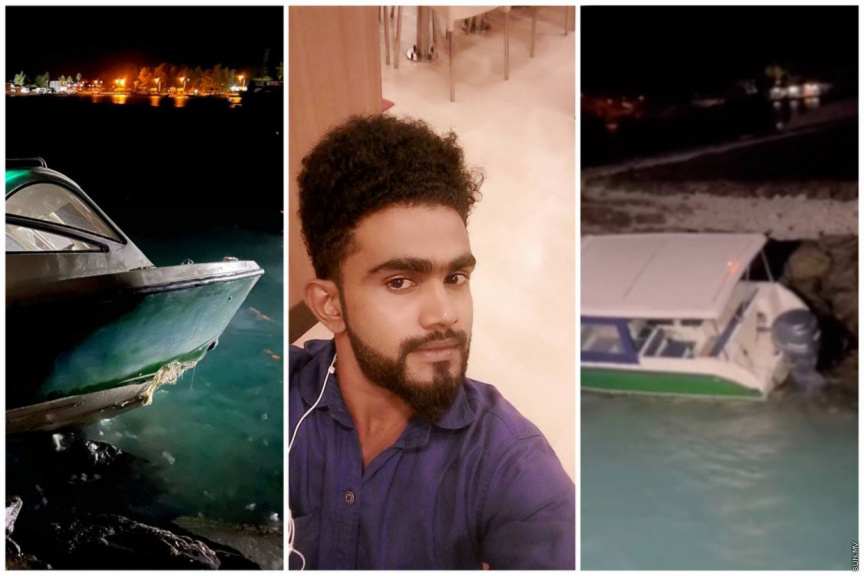 Ishaaq Abdul Muhsin - is critically injured and current on a ventilator, during the accident that claimed his older brother Misbah Abdul Muhusin 's life (M). Damages caused to the speedboat involved in the accident that took place near Ga. Vilingili (L) (R).

A younger sibling of one of the deceased victims in the speedboat accident that took place near Ga. Villingili is in critical condition.

Two people died in the accident where the speedboat hit the entrance channel as it was going into the Villingili lagoon.

The Manager of Ga. Atoll Hospital Shareef Ahmed has confirmed to Sun that two people have passed away, and also stated that the remaining three were undergoing treatment in the hospital.

Among these, Ishaaq Abdul Muhsin, who is the younger brother of Misbah is currently on a ventilator.

Shareef further detailed that efforts are underway to transfer Ishaaq and the remaining two people to Male’ for further treatment.

Police stated that a total of five people were travelling in the vessel and that they had initially received reports of two missing people after they went overboard in the accident.

LAFC hopeful Bale can join club within a couple weeks

Motion filed to cut down benefits for ex-MPs

"Everyone in government committed money laundering"