Chiellini bids goodbye to Juve fans during draw with Lazio 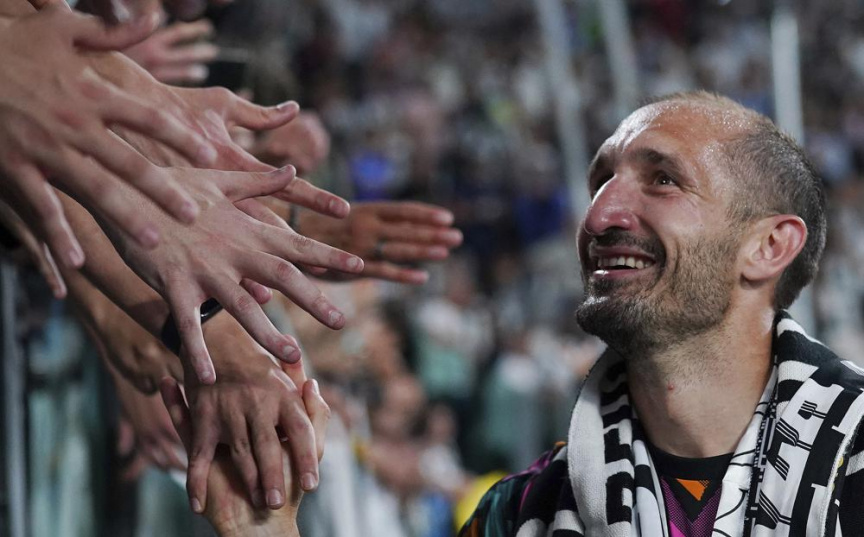 Juventus's Giorgio Chiellini greeted by fans during the Serie A soccer match between Juventus and Lazio at Allianz Stadium, Turin, Italy, Monday May 16, 2022. (Spada/LaPresse via AP)

TURIN, Italy (AP) — Juventus captain Giorgio Chiellini bid goodbye to the Turin club’s fans during a 2-2 draw with Lazio in Serie A on Monday.

After 17 seasons at Juventus, Chiellini recently announced he was leaving at the end of the season — likely for MLS in the United States — and this was the Bianconeri’s final home match of the campaign.

When Chiellini came off in the 17th minute, he took off his armband and placed it on Paulo Dybala -- another player likely to leave Juventus -- then blew kisses to the crowd and hugged his teammates, and even one Lazio player, before being replaced by Matthijs de Ligt.

Chiellini then went along the stands to shake hands with fans.

Sergej Milinkovic-Savic scored in the final second for Lazio to secure a Europa League spot for the Roman club.

Alvaro Morata set up one goal for Dusan Vlahovic then scored himself before Lazio pulled one back after the break with an own goal from Alex Sandro.

The 22-year-old Vlahovic, who joined from Fiorentina in January, has 51 goals in Serie A — matching Dejan Stankovic for the most ever by a Serbian player.

Dybala also got a nice reception when he exited late in the second half.

Fifth-placed Lazio secured a top-six finish with one match remaining.

While 15th-placed Sampdoria had already been assured of avoiding relegation, seventh-placed Fiorentina was still fighting for a spot in Europe.

With one round remaining, Lazio has 63 points, Roma 60, Fiorentina 59 and Atalanta 59. One of the four clubs will miss out on Europe.

Historic day of defeats for big teams in Serie A