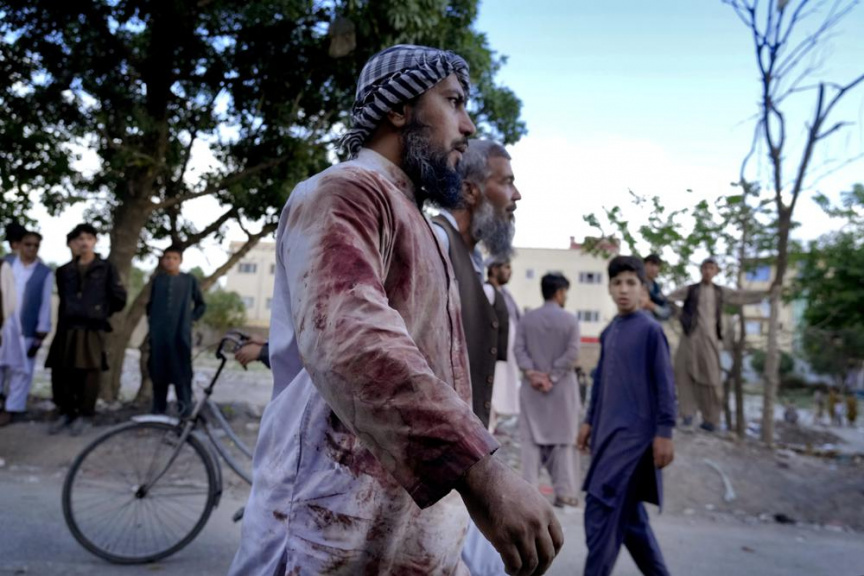 KABUL, Afghanistan (AP) — A powerful explosion ripped through a mosque in the Afghan capital of Kabul on Friday, killing at least 10 people and wounding as many as 30, a Taliban spokesman said.

Hundreds of worshippers had gathered for prayers on the last Friday of the Muslim holy month of Ramdan and the Khalifa Aga Gul Jan Mosque was packed, said local residents, fearing the casualty toll could rise further.

The Taliban-appointed interior ministry spokesman, Mohammad Nafi Takor, could not provide more details and Taliban security men cordoned off the area. The source of the explosion was not immediately known and no one has claimed responsibility for the blast.

Initially, at least 20 were reported wounded but Khalid Zadran, spokesman for the Taliban-appointed Kabul police chief, later raised the number to as many as 30. The death toll remained at 10, he said and also tweeted that “security agencies are investigating the incident.”

The explosion was so loud that the neighborhood of the mosque shook from the blast, the residents said, speaking on condition of anonymity, fearing for their own safety.

Ambulances raced to the site, driving up to the end of a narrow street in an eastern neighborhood of Kabul to reach the mosque, which belongs to Afghanistan’s majority Sunni Muslims.

Wahid, an Afghan in his 30s, said he was home when he heard about the blast and rushed to the mosque right away, knowing his brother was there. He recalled the scene of mayhem, the screams and shouts for help. He helped carry the wounded to ambulances.

“Everyone was crying and covered in blood,” Wahid said. “I was told my brother had been hurt.”

The Associated Press spoke to Wahid outside the Italian-run EMERGENCY hospital, where he had gone to give blood, but Taliban guards cordoned off the hospital, denying access to everyone but the wounded. He finally found his brother, wounded in the arm and leg.

The hospital, which treats only the war-wounded, tweeted that its staff reported the facility has admitted at least “23 wounded” and two who died shortly after the explosion.

Javid, who appeared to be in his late 20s, said he was on his way to the mosque to join his brother and cousin who were already there, when he heard the explosion. He rushed to the scene.

“I was so afraid and ran there,” he said, adding that he had found both his brother and their cousin, slightly injured and released after treatment. The explosion was so powerful, Javid said the roof of the mosque collapsed.

Wahid and Javid would only give their first names to the AP, fearing for their own safety.

The United Nations condemned the explosion, describing it as “heinous” and “yet another painful blow to the people of Afghanistan who continue to be exposed to unremitting insecurity and violence,” according to Ramiz Alakbarov, the U.N.’s deputy special representative coordinating humanitarian relief.

“It is unconscionable for civilians to be targeted indiscriminately as they go about their daily business, gathering for prayers, going to school or the market, or on their way to work,” he said.

The explosion was the latest in a series of such blasts amid relentless attacks across the country. Similar attacks on mosques have recently targeted the country’s minority Shiite Muslims and were claimed by the Islamic State group’s regional affiliate, known as Islamic State in Khorasan Province or IS-K.

IS has stepped up its attacks across Afghanistan to become the primary enemy of the Taliban since their takeover of the country last August.

Despite Taliban claims to have routed IS from its headquarters in eastern Afghanistan’s Nangarhar province, the militant group’s renewed assaults on mosques, schools and buses underscores the intransigent threat it poses.

Last week, 33 Shiite worshippers died in the northern city of Mazar-e-Sharif, when a bomb struck their mosque and an adjacent religious school. IS has claimed responsibility for that attack.

There are also other militant groups operating in Afghanistan and despite Taliban promises that Afghan territory would not be used to harbor non-Afghan insurgents, militants fighting many of Afghanistan’s neighbors have found a safe haven in the country.

The relentless bombings have prompted protests by minority Shiites and have seriously undermined Afghanistan’s new Taliban rulers as they transition from insurgency and war to governing and trying to bring security to the war-ravaged nation.

Aftershock in Afghan as quake toll rises to 1,150 dead

'Crew not at fault for Afghan deaths in evacuation'