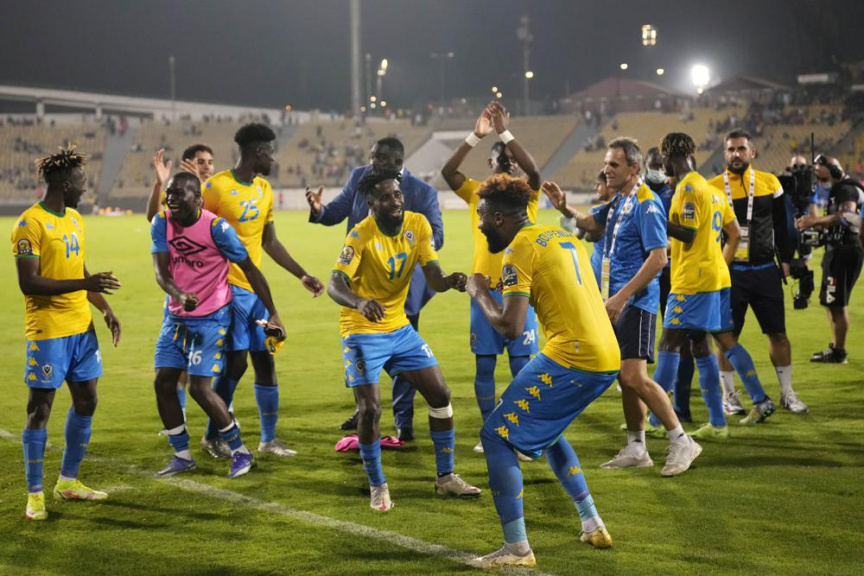 YAOUNDE, Cameroon (AP) — Ghana conceded a late goal to draw with Gabon 1-1 and also had a player red-carded for a punch on an opponent after the final whistle as their African Cup of Nations game ended in a melee on Friday.

The result left four-time African champion Ghana, which famously hasn’t won the Cup of Nations since 1982, third in Group C behind Morocco and Gabon.

Ghana substitute Benjamin Tetteh was the man sent off after the game ended for landing a punch on Gabon’s Aaron Boupendza as players and team officials pushed and shoved each other on the field at Yaounde’s Ahmadou Ahidjo Stadium. Boupendza raced into the middle of the post-game melee and Tetteh greeted him with a right hand. Tetteh is heading for a ban.

While Ghana also frets over a possible group-stage exit, Morocco is through to the last 16 in Cameroon after a 2-0 win over debutant Comoros in the day’s first game in Group C.

Senegal continued to struggle at the start of its African Cup and drew with Guinea 0-0 in Group B, although that result left both teams in good shape to qualify.

The battle of Liverpool stars Sadio Mané of Senegal and Naby Keita of Guinea never really materialized at Kouekong Stadium in Cameroon’s western city of Bafoussam. Keita did get yellow-carded for a foul on Mané, though.

That was nothing compared to Tetteh’s right hook for Ghana.

Ghana’s anger erupted at the end because it felt Gabon’s goal in the 88th minute was against the spirit of the game. Ghana had intentionally put the ball out of play so one of its players could get attention from medical staff. Gabon didn’t give it back and instead started a move that ended with substitute Jim Allevinah sweeping a shot across Ghana goalkeeper Jojo Wollacott and into the bottom right corner.

It started so well for Ayew when he unleashed one of the goals of the tournament on the 18th. He turned away from his marker and hit a shot from a distance that rocketed into the bottom left corner.

Ayew was substituted after Gabon’s goal and gave the first signs of real ill-feeling between the teams when he shouted and gestured angrily at Gabon coach Patrice Neveu as he walked past him on the sidelines.

With the incident that led to Gabon’s goal simmering, the fracas after the final whistle erupted quickly, and Ghana’s Joseph Paintsil also got a yellow card from it.

Gabon’s late equalizer was tempered by news earlier in the day that striker Pierre-Emerick Aubameyang was diagnosed with "cardiac lesions" — as has two of his teammates — after they all contracted the coronavirus.

Aubameyang had come out of isolation and was expecting to make his return to the Gabon team against Ghana, but medical checks by the Confederation of African Football found evidence of heart lesions and he was ruled out by CAF’s medical commission.

It could mean an end to Aubameyang’s tournament without the Arsenal striker playing a game, although the Gabon Football Federation suggested the diagnosis wasn’t serious and the medical officials “did not want to take any risks.”

Meanwhile, Malawi beat Zimbabwe 2-1, coming from 1-0 down with a brace by Gabadinho Mhango. Malawi is playing in its first African Cup since 2010 and only its third-ever and gave itself a chance of reaching the second round.

The top two teams in each of the six groups qualify automatically for the round of 16 as well as the four best third-place teams.

Ghana out from African Cup in shock loss to Comoros