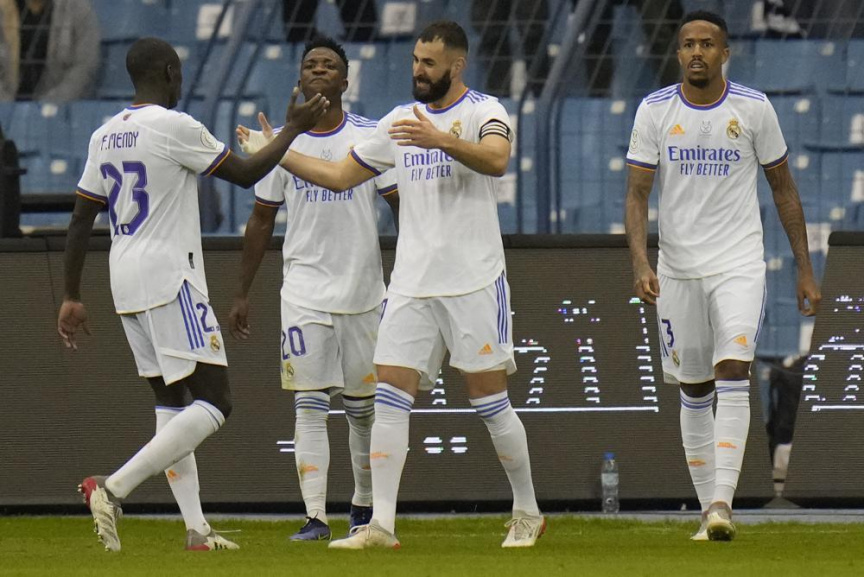 RIYADH, Saudi Arabia (AP) — Barcelona put on a good fight as an underdog, but in the end it was Real Madrid celebrating again after a thrilling “clásico” between the Spanish powerhouses in Saudi Arabia.

Federico Valverde scored in extra time to give Real Madrid a 3-2 win over Barcelona on Wednesday for its 100th victory over its storied rival and a spot in the final of the Spanish Super Cup.

Barcelona twice equalized in regular time but couldn’t recover after Valverde scored from close range on a breakaway eight minutes into extra time to give Madrid its fifth straight win over the Catalan club in all competitions.

“We competed well,” Barcelona defender Gerard Piqué said. “It’s not the result we wanted but we are a step closer to winning. I’m very proud of our team. We have to leave with our heads up after the way we played against a Real Madrid team that is having a very good season.”

The Spanish Super Cup is being played in Saudi Arabia again after the coronavirus pandemic transferred last year’s edition back to Spain. The competition was moved to Saudi Arabia — and expanded from two to four teams in a “Final Four” format — as part of a deal reportedly worth 30 million euros ($34 million) a year until 2029.

The changes drew criticism from human rights activists and complaints from fans who preferred the competition stayed in Spain. Among those complaining was Athletic midfielder Raúl García, who said this week it made “no sense” to play the games away from Spain.

It was Madrid’s 100th win over Barcelona in 248 competitive matches against the rival. Barcelona has 96 wins, though none since 2019.

“I have to admit that Barcelona played well,” Madrid coach Carlo Ancelotti said. “It was an even match. We were efficient on the counterattacks.”

It was a mostly even match but Madrid looked the more dangerous team throughout thanks to its counterattacks led Vinícius Júnior and Benzema.

The duo gave Madrid the lead in the 25th minute after Benzema stole the ball from Barcelona midfielder Sergio Busquets near the midfield line and fed Vinícius, who made a run into the area and beat goalkeeper Marc-Andre ter Stegen with a shot into the top of the net.

Barcelona equalized with a fluke goal near the end of the half. Madrid defender Éder Militão tried to clear a ball from inside the area but his shot bounced off Barcelona striker Luuk de Jong and then off the post before going over the line.

Benzema hit the post in the 69th, then a couple of minutes later put Madrid ahead again from close range off the rebound of a deflection by Ter Stegen following a cross by Dani Carvajal. Ter Stegen had stopped another Benzema shot just moments earlier.

Ansu Fati, who replaced De Jong in the 66th, leveled the match again in the 83rd with a header off a well-placed cross by Jordi Alba.

Valverde, who replaced Luka Modric in the 83rd, scored the winner in extra time after a fast counterattack by Madrid, converting a cross by Rodrygo from the right flank with Barcelona’s defense heavily outmanned.

Madrid arrived as as one of the hottest teams in Spain and was the favorite over a Barcelona side still rebuilding after the loss of Lionel Messi to Paris Saint-Germain. The Catalan club trails its rival by 17 points in the Spanish league with a game in hand.

It was the first clásico for Xavi Hernández as Barcelona coach. Ronald Koeman was still at the helm when the Catalan club lost 2-1 to Madrid at the Camp Nou in the first clásico of the season in the league last October.

Ferran Torres made his Barcelona debut after being signed from Manchester City. Torres and young midfielder Pedri González arrived in Saudi Arabia later than their teammates because they tested positive for the coronavirus. Torres, who was substituted at halftime, hadn’t played since getting injured with Spain’s national team in October.

Madrid was without defender David Alaba because of an injury.

Madrid made it to the “Final Four” after finishing second to Atlético in the league last season. Barcelona qualified as the Copa del Rey champion, which it won over Athletic.

Only about 30,000 fans were allowed at the 62,000-capacity King Fahd International Stadium because of the coronavirus pandemic.