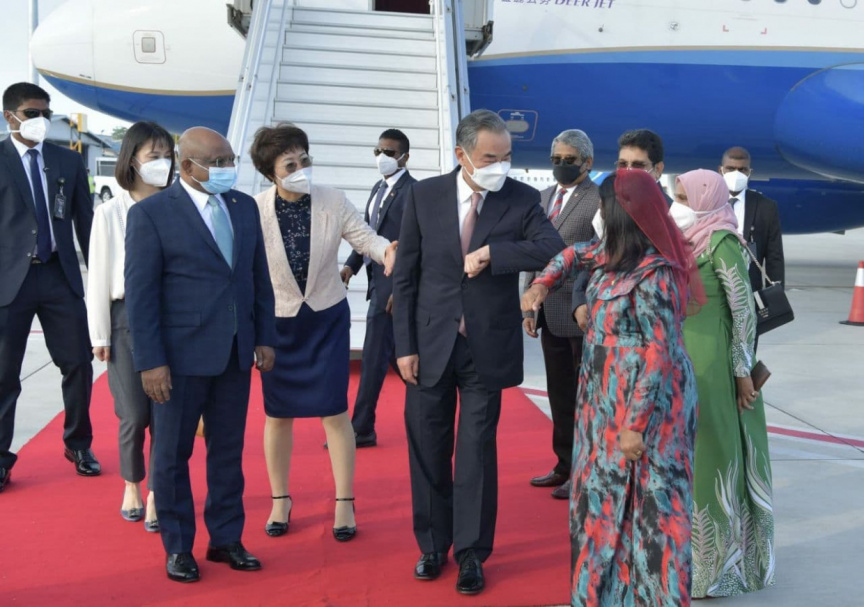 The State Councilor and Minister of Foreign Affairs of China Wang Yi arrived in Maldives on Friday to commence an official at the invitation of his Maldivian counterpart Abdulla Shahid.

Upon arrival at the Velana International Airport (VIA), Minister Yi was received by Foreign Minister Shahid and senior officials of the Foreign Ministry.

As per the Foreign Ministry, during this visit, Minister Yi will pay a courtesy call on President Ibrahim Mohamed Solih, and will also hold Official Talks with Foreign Minister Shahid.

Additionally, both ministers will witness the signing of a number of key agreements on important areas such as infrastructure development, health, and travel between Maldives and China.

The Foreign Ministry noted that this visit is a part of both countries efforts to strengthen the long-standing bilateral ties and to commemorate the 50th Anniversary of the establishment of diplomatic relations between Maldives and China.

Ahead of Minister Yi's arrival, the President of the United Nations General Assembly (UNGA) and Minister of Foreign Affairs Abdulla Shahid arrived in Maldives earlier in the day.

"FTA will promote cooperation between China-Maldives"