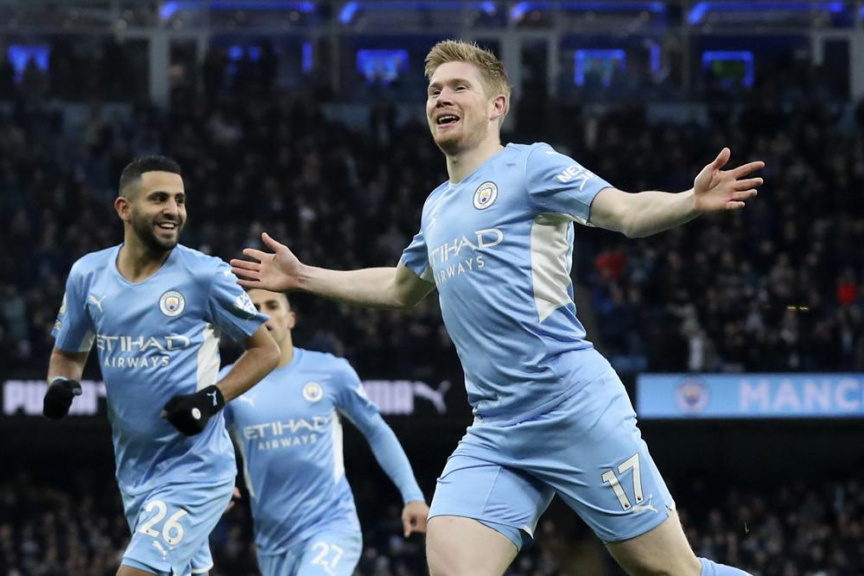 Chaos has reigned in the Premier League in December, with COVID-19 outbreaks decimating squads, forcing the postponement of 17 games and fueling talk of a pause in play that never materialized.

Manchester City has risen above it all.

Such is City’s sudden dominance of the league that one of its rivals appears to be waving the white flag.

“We have seven COVID cases, we have five or six players out for six or more weeks,” said Thomas Tuchel, the manager of second-place Chelsea. “How should we compete in a title race?”

While Tuchel TV cameras panned to City substitutes Raheem Sterling and Riyad Mahrez, two of the team’s in-form players who had been given a rest and were sitting alongside each other in the dugout having clearly been told they wouldn’t be coming on. Indeed, City manager Pep Guardiola didn’t make a single substitution, having rotated his starting lineup that contained a completely fresh attacking trio of Phil Foden, Jack Grealish and Gabriel Jesus.was grumbling about his misfortune minutes after seeing Chelsea concede a stoppage-time goal to draw 1-1 with Brighton at Stamford Bridge, City — playing just 5 miles (8 kilometers) further west of London — was seeing out a 1-0 win at Brentford to complete a perfect month of 21 points.

What luxury. Especially at a time when some teams have requested postponements because they couldn’t call up the minimum number of players required — 13 plus a goalkeeper.

And that just might be the difference. The best and most expensively assembled squad in the league — managed by possibly the world’s top coach — has coped best with the most grueling period of the season, when fixtures come thick and fast and English soccer attracts more eyeballs than ever because every other big European league is on a winter break.

It was in December last year that City began a 21-match winning run in all competitions that lifted the team from a mid-table position in the Premier League — albeit because the team had some games in hand — to first place and a lead of 15 points.

Fast forward a year and City was third, five points behind leader Chelsea, after its 2-0 home loss to Crystal Palace on Oct. 30. Ten straight wins later, City is eight points clear of Chelsea and nine ahead of third-place Liverpool, whose 1-0 loss at injury-hit Leicester on Tuesday was another late Christmas present for Guardiola. Liverpool has a game in hand on both City and Chelsea.

City has a great opportunity to expand the gap, too. Chelsea and Liverpool meet on Sunday, so one or both of the teams are sure to drop points. By then, City will have played Arsenal.

While Chelsea has a defensive crisis with Ben Chilwell (knee) out for the season and Thiago Silva, Andreas Christensen and Reece James also out injured, Liverpool will lose its two star forwards — Mohamed Salah (Egypt) and Sadio Mane (Senegal) — to the African Cup of Nations following the Chelsea game.

City will also be deprived of Mahrez, who will play in the tournament for Algeria, but can still boast such an array of attacking options that the club was happy to sanction the sale of Spain forward Ferran Torres to Barcelona this week for an initial 55 million euros ($66 million).

Amid a widespread rush to label City as the hot favorite for another league title, Guardiola wasn’t getting ahead of himself.

“We are on a good run, but it’s the end of December,” he said after the Brentford game. “There are many games to go. We are eight points in front but there are 54 still to play for and many tough games still to play.

“I’m not going to believe anyone who says it’s already done. The teams we have with (us) — Chelsea and Liverpool — are more than exceptional.”

City has managed to avoid being affected by too many COVID-19 cases among its playing staff, at least publicly anyway.

The team even has the fixture schedule on its side, having already played away to Chelsea, Liverpool, Manchester United, Tottenham and Leicester in the league this season.

Heading into January, the champions have done the hard yards. A sixth league title in 11 seasons is already in sight.

Everton out of relegation zone with win over Leicester